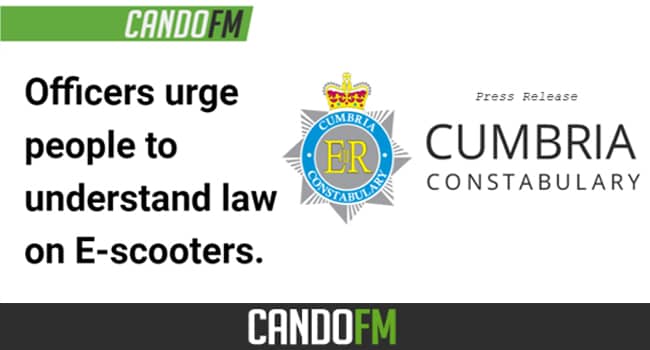 Officers from the force’s roads policing unit are urging people to fully understand the law before buying or riding an E-Scooter.

E-Scooters are illegal to use on roads, footpaths, cycle tracks/lanes, bridleways, or byways. The only legal place these privately purchased scooters can be ridden are on private land with the owner’s consent.

E-scooters have become popular this year, after the Government permitted the start of trials for rental schemes in July.

However, while the use of rental e-scooters is now legal in some parts of the UK, Cumbria Police are keen to remind people that it remains against the law to ride a privately owned e-scooter in any public place in the UK.

The E-Scooters also are potentially dangerous to riders and other member of the public with some reaching speeds of 30+mph.

E-scooters are classed as a powered transporter and come under the same legislation as motor vehicles, therefore you need a licence and insurance to ride them. They also need to be registered to be ridden on the road and are subject to technical standards such as MOT and vehicle tax.

“Any person who uses an electrical scooter, powered transporter on a public road or other prohibited space as listed above in breach of the law will be committing a criminal offence, therefore can be prosecuted as well having the scooter seized under road traffic legislation.

“I would urge anyone who is considering buying an e-scooter for themselves or for their children to think again unless you have private land in which you can use them.

“We have seen a surge of anti-social behaviour involving these scooters and we are actively enforcing legislation- Please be warned that if you are found riding an E-scooter on a road, footpath, bridleway, or byway we will be seizing the scooter and reporting you for offences, ultimately resulting in penalty points on your driving licence, driving disqualification and or fines.

“Please help keep yourselves and out communities safe.”

Police and Crime Commissioner Peter McCall said: “It is against the law to ride a privately owned e-scooter in any public place in the UK and the trial scheme to use hired e-scooters on roads can for some people, lead to confusion.

“The legislation for hiring an e-scooter is the same as if hiring a car, and people using them must follow the rules and regulations for using a vehicle on a public highway or they may be awarded penalty points on their driving licence, a fine or be disqualified from driving.

“Keeping people safe on our roads is an issue that everyone can be involved in. Individuals, families, friends and communities all have a role to play in helping to promote safer driving in county. It is only by working together that we can improve road safety and ultimately, help save lives.”