Sarah and Duck heads to the forum this Summer 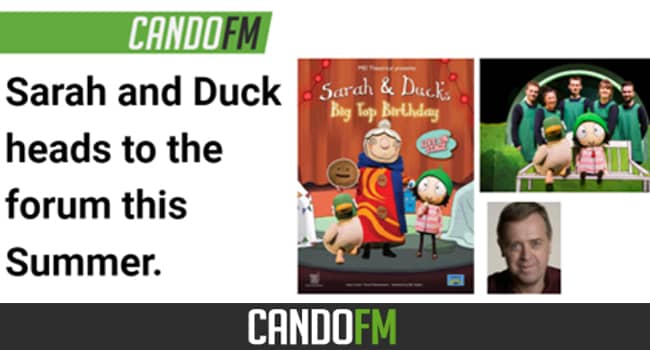 The enchanting world of CBeebies’ hit animated series Sarah & Duck comes to life on stage in Barrow-in-Furness this July as part of a brand-new UK Tour. Featuring a host of wonderful characters from the BAFTA Award-winning TV show, Sarah & Duck’s Big Top Birthday plays 4 performances only at the forum theatre on Saturday 10 and Sunday 11 July.

Join Sarah and Duck, along with all their favourite friends including The Ribbon Sisters, The Shallots, Flamingo and Umbrella, as they plan a circus-themed birthday party for Scarf Lady in their garden. But when the weather turns windy and the big top is blown away, will Sarah and Duck be able to save the day?

Told through a fantastic blend of inventive puppetry, charming storytelling and toe-tapping music, and featuring all the familiar voices from the CBeebies series including Roger Allam as the Narrator and Lesley Nicol as Scarf Lady, Sarah & Duck’s Big Top Birthday will take families on a magical theatrical adventure.

Following the gentle adventures of a wide-eyed, 7-year-old girl and her feathered best friend, Sarah & Duck has been a huge hit since its debut in 2013, winning a BAFTA for ‘Best Pre-School Animation’ in 2014 and regularly appearing in CBeebies’ Top Ten programmes for viewers aged 4-15. Now in its third series, it is shown in over 100 counties around the world.

Sarah & Duck’s Big Top Birthday is written by Polka Theatre’s artistic director Peter Glanville and Sarah & Duck co-creator Sarah Gomes Harris. It is directed by Roman Stefanski with set and puppet design by Laura McEwen. It is presented by MEI Theatrical in association with Polka Theatre. Sarah & Duck is a Karrot Entertainment production for CBeebies UK and BBC Studios.