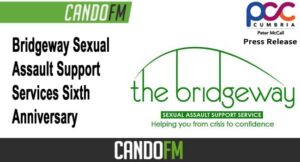 Prior to the launch of the Bridgeway Sexual Assault Support Services in Cumbria six years ago, the county did not have a Sexual Assault Referral Centre (SARC), where victims could go for a forensic-medical examination.

The Sexual Assault Referral Centre, opened in 2015 and provides a place where victims can go to have forensic samples collected and be supported by a crisis worker who offers emotional support and practical help to deal with the immediate impact of rape or sexual assault.

The opening of the centre also marked the introduction of a 24/7 helpline both for those needing immediate support and referral onto therapeutic services or Independent Sexual Violence Advisors (ISVAs) for example. ISVAs provide practical and emotional support for victims of sexual assault and sexual abuse, including support to understand the criminal justice system for those who have reported their case to the police.

Since opening, they have received over 1,490 referrals and carried out over 730 forensic examinations, with 55% of all the people who accessed the Bridgeway SARC, being referred by the Police.

Since the start of 2021, 265 people have contacted the Bridgeway SARC of which 140 people were offered an examination at the SARC. Out of those that used the service, 26% were under 18 years of age, 83% of people who attended for an examination were referred to the ISVA for follow on care and support. Around 60% of all who accessed the SARC (not for an examination) were referred on to the therapeutic and counselling services. The Bridgeway also refer people onto other services, as appropriate to their needs, like mental health teams and substance misuse services.

Peter McCall comments: “We take any report of rape or sexual assault seriously and our dedicated specialists and investigators deal with all reports sensitively and professionally, right here in Cumbria.

“I welcome the fact that more people have the confidence to come forward and be supported. However, during December the number of incidents of sexual assault, rape and violence rise significantly.

“For some people, Christmas can be the most dreaded part of the year. People do not have to suffer in silence and feel they have to cope alone. Crisis support and non-judgmental advice are available any time of the day or night via The Bridgeway’s free helpline, 0808 118 6432 and can be accessed directly, as well as through the Police.”

Talking about Sexual Assault Referral Centres (SARC), Jess from Workington, a victim of rape and sexual assault said: “I would encourage anyone that may be doubtful or unsure about contacting a SARC, to get in touch with them, as I know for me it made such a difference.

“At the time I was scared, but I’m so glad I did it, as it resulted in my attacker getting the time in prison he deserved.

“The staff at the SARC were amazing, so comforting and friendly, at a time I needed it most. They gave me all of the jabs and tests I needed to ensure that I would be ok and healthy in the future.

“They carried out forensic examinations and made a DVD of the injuries that I had sustained, which all could be used in court as evidence. This made a huge difference for when my case did go to court.

“The medical examiners also provided an in-depth report of their findings which again was used in my case and they also agreed to speak on my behalf.”

Donna Cardell from The Bridgeway comments: “It is important to remember that we take referrals from anyone, as long as the person has consented.

“We will also assess and offer a forensic examination to anyone (over 16 years of age) who has suffered sexual violence and it is appropriate and within the forensic timescales to help gain any evidence, even if they are not ready to tell the police at that time.

“We will continue to provide this high standard of care as we go into the next year and beyond.”

Detective Chief Inspector Vicki Coombes said: “The Bridgeway continues to provide vital support and advice to victims of rape or sexual assault, regardless of when an offence occurred.

“Prior to the Bridgeway opening six years ago, victims who wished to access the services that a Sexual Assault Referral Centre (SARC) provides, would have to travel outside of the county for this specialist care, so it really is an invaluable service which supports victims locally.

“If you have been the victim of rape or sexual assault, I would encourage you to report it to police, so that our specialist officers can help and support you in conjunction with the Bridgeway. It is also really important to note, that anyone wishing to self-refer to the Bridgeway, if you don’t feel able to contact the police, will be supported by them and any report will be dealt with confidentially. “