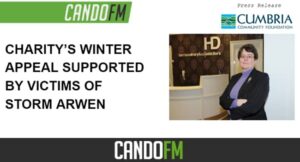 When Storm Arwen hit Cumbria on 25th November, more than 118,000 homes were left without power. Hundreds were still without power a week later.

Over the course of the week, teams from various multi-agency organisations and volunteers, have been working around the clock to check on residents’ safety and welfare and provide advice and support where required.

For many residents, they relied on family, friends and neighbours and it brought home how important a warm home is.

Payments to customers following storms are set nationally by energy regulator Ofgem, depending on the severity of the incident. Storm Arwen is classed as a ‘category 2’ storm in the North West, meaning customers are eligible for payments of £70 if they have been without power for 48 hours, plus a further £70 for each additional 12-hour period that they are off supply, up to a maximum of £700.

Cumbria Community Foundation, which runs the annual Winter Warmth Appeal, has been approached by people who want to donate their compensation to those who struggle to keep warm.

Over the last five years, an average of 300 people have died in Cumbria from cold-related illnesses, the majority over 60, because they cannot afford to keep their heating on.

David, from Ulverston who recently donated, said: “I was without power for over three days. We have an Aga so could keep warm in one room. It made me realise how important being able to heat a home is and many older Cumbrians are deprived of this. I’m fortunate to afford my energy bills and want to donate my compensation to someone who really needs it.”

The appeal works in partnership with Age UK across the county and Copeland Age & Advice Service to award the grants of up to £250 to help keep vulnerable older people warm and well over the colder months.

It was set up in 2010 for people who receive the government Winter Fuel Payment to recycle it if they don’t need it. In that time, more than £1.2m has been raised. Last year, thanks to people’s warm generosity donating £200,000, more than 1,500 Cumbrians were helped to pay fuel bills.

Jan Wright, a partner at HD Solicitors in Kendal, whose home in Crook was one of the households affected by the power cuts, said: “I think this is a great idea. Clearly those who need the compensation payments which are being offered should take them, but if your losses are less than that which you can claim, I would strongly urge you to make the claim to Electricity North West and then donate the money to the Winter Warmth Appeal, which will then be redirected to people who really need it.”

Customers should contact StormArwen@ENWL.co.uk for any questions relating to the storm, compensation, or damage to electrical appliances.

Cumbria Community Foundation Chief Executive, Andy Beeforth, said: “Each year we hear heartbreaking stories of older people having to scrape by to afford so-called luxuries we take for granted, such as waking up to a warm house.

“If anyone who receives compensation really does feel they can spare some or all of it, we can recycle that money and help someone who will be dreading the cold weather and deciding to either huddle in one warm room or go without a hot meal. It really is as stark as that.”