The council held a ceremony to hoist an Armed Forces Day flag above Kendal Town Hall to say thank you to the men and woman who make up the Armed Forces community, from currently serving troops to service families, veterans, war widows, reservists and cadets. 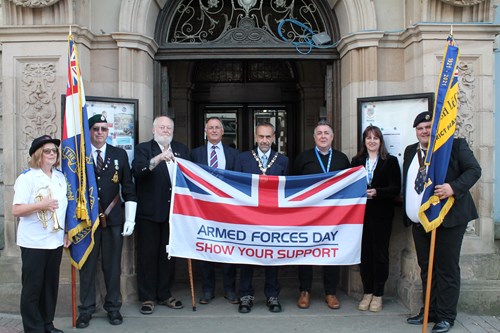 The flag will remain above Kendal Town Hall until after Armed Forces Day on Saturday, 25 June.

SLDC Chairman Councillor Pete McSweeney said: “It’s always a privilege to pay tribute to service personnel past and present – especially so in this Platinum Jubilee year when we thank those who serve and have served in Her Majesty’s Armed Forces throughout her long reign.

“Today we’ve come together to raise the flag and say thank you for everything the forces do for our country. Their duty and dedication to keeping us safe is outstanding, and we would also like to salute their families for the sacrifices they make behind the scenes.

“We all share the same goals of living together in peace, supported by the entire Armed Forces community. I hope that today’s flag-raising ceremony will give a much-valued morale boost to South Lakeland’s service personnel and their loved ones at home and overseas.”

This year is the 14th Armed Forces Day and celebrations will be taking place across the country. To find out more, visit: www.armedforcesday.org.uk