PCSO uses life experience to support others with neurodiversity 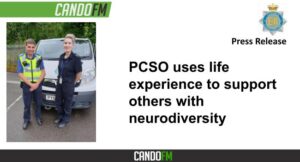 A Police Community Support Officer (PCSO) is using his own lived experience to support people with neurodiversity traits.

PCSO Pete Nichol has been with Cumbria Constabulary for ten years and works within west Cumbria covering Allerdale.

Pete has been diagnosed with Autism, ADHD, Dyslexia, a Chromosome disorder, and traits of OCD and uses his experiences to support others and to engage with young people.

Some of the work that Pete has been doing in the community includes providing support to people with neurodiversity traits and their families and working with those involved in low level crime to prevent further criminality.

PCSO Pete Nichol said “I have recently been diagnosed with various neuro traits during my time while working within Cumbria police.

“I now use my lived experiences to support people who may have been diagnosed or going for a diagnosis for a neuro disability and who may be a victim of crime or involved in low level crime and support that person through that experience.

“I do a lot of educational work within schools around neuro diversity and work with a lot of young people and their families who may be finding things difficult and again offer that support.

“I work closely with Shirley Murphy from the Allerdale/Copeland autism support group and together we visit vulnerable people with autism to try and get them to have confidence to go back into society/education depending on what that person’s need are.

“I am also affiliated to the Cumbria autism academy and work very closely with the school for both educational/support needs.

“I have also been in contact with MP Trudy Harrison during one of her surgeries and we have a contact for any support in the future.

“I very much enjoy my role as a neuro disability champion for Allerdale NPT and I am very much supported by Sgt Leesa Edwards who helps support me within my role.”

Sergeant Leesa Edwards said “We have already received positive feedback from the community that Pete is having a huge impact on people’s lives through the support he is providing as a neurodiversity champion.

“Pete is also working closely with the Autism academy and local charities as part of this role.

Shirley Murphy founder of Autism Support Allerdale and Copeland said “Since working alongside Pete in his role as Nuerodiversity officer, we have made a difference to many families who have individuals with Autism.

“We work so well together and we bounce ideas of support off each other. There are certain things that Pete can do within the role that I can’t and things I can do which wouldn’t be appropriate in Pete’s role.

“We have been into schools and have done quite a few home visit’s which families have welcomed, and the feedback we get is really positive too. This work is imperative for our families as once they have received a diagnosis for their child/adult there is no support out there unless you look really hard. I thoroughly enjoy working alongside Pete and it has a good feeling knowing we are making a difference together.”