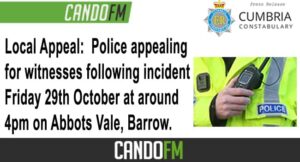 It is reported that a man was in possession of a firearm which was found to be an imitation.

During the incident a man and women were assaulted, the man suffered facial injuries. Damage was also caused to a property.

He has been released on police bail.

Anyone with information relating to this incident can report online at www.cumbria.police.uk/reportit, quoting incident number 160 of 29th October 2021.