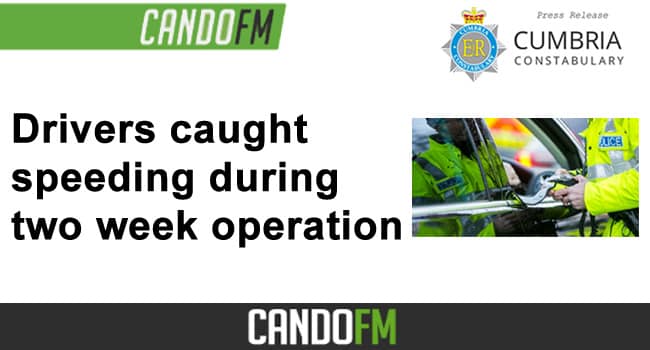 Officers taking part in a national speeding operation issued 76 traffic offence reports during a two weeklong operation.
Officers from the Mobile Support Group and officers from across the force targeted those speeding on our roads putting themselves and others at risk.
36 drivers were also reported to court for driving over the road’s limit with officers also verbally warning 54 drivers.
Sergeant Craig Hynes from the Mobile Support Group said “We target all the four factors that contribute to serious injury and fatal collisions 24/7, this week of action just highlights some of the work we do.
“It’s disappointing to see that drivers are still speeding at excess putting themselves and other road users at risk.
“We will look to investigate those who drive dangerously on our roads.
“It’s important that we all educate ourselves on the consequences, even a few miles over can increase the risk of a collision being fatal or causing serious injury.
Cumbria’s Police and Crime Commissioner, Peter McCall, said: “Dangerous and anti-social driving is an issue that is continuously raised with me as Police and Crime Commissioner.
“This two-week long operation is just a snippet of what the Police do year-round, but it gives us a strong idea of how many people are still driving dangerously on Cumbria’s roads.
“Dangerous driving is a selfish act, I would like to remind anyone who drives recklessly that not only are you placing yourself in danger but you’re risking the lives of other innocent drivers, passengers and pedestrians.
“I would urge all road users to drive safely and appropriately – the laws are in place to protect everyone so please do not risk the possibility of accidents and, worst case scenario, fatalities.
“The message is clear: anyone who is caught breaking the law will be dealt with appropriately by the Police.”