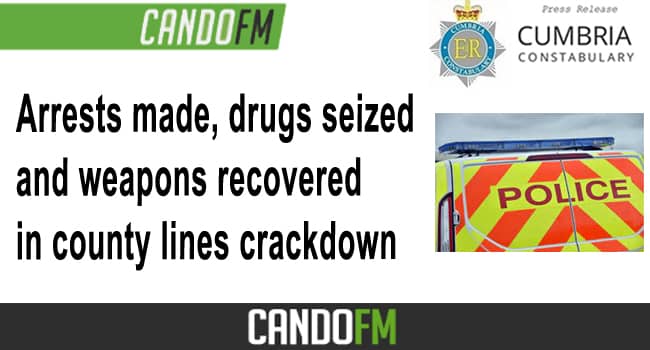 Arrests were made, drugs seized and weapons recovered as Cumbria Constabulary targeted county lines crime during a week-long national focus on the issue.

Officers in the county take action every day to tackle the threat from county lines drugs gangs and protect those potentially being exploited.

Throughout this week of intensification, law enforcement collectively stepped up its response and enhanced already active investigations.

Officers in Cumbria focused on disrupting the activities of those suspected to be involved in county lines through a number of policing tactics.

Results and action from the week, running from October 11 to 17, included:

They exploit young people and vulnerable adults to move and sell the drugs and sometimes ‘cuckoo’ the homes of vulnerable or drug-addicted people, taking them over and using their property as a drugs base.

Detective Chief Inspector David Cooper said: “We are working harder than ever to crack down on county lines.

“We’re committed to dismantling these criminal networks and to protecting the young and vulnerable people who are exploited by gangs and are subject to violence, fear and intimidation.

“County lines is exploitative drug supply and is devastating to local communities, well beyond those who are directly involved in the local drugs scene.

“We will do all we can to stop county lines drugs criminals targeting our communities as they aim to line their pockets at other people’s misery.

“Working closely with our external partners and partners in the police and regional organised crime units is vital in our fight against drug trafficking and county lines.”

DCI Cooper added: “While law enforcement has made significant progress, this is not an issue we can tackle alone.

“Local agencies, charities, partners, schools, parents all need to help us protect the most vulnerable in our communities.

“Tackling county lines is in equal parts about safeguarding victims, shutting down the line and targeting line holders.”

Cumbria’s Police and Crime Commissioner, Peter McCall, said: “While the policing battle to confront county lines is always ongoing, this intensification week really highlights the positive work that the Constabulary do year-round to tackle county lines.

“I hope it also serves to remind every member of the public, that we need you to help by giving information to the police to help get drugs off our streets and to protect vulnerable and young people in our communities from this destructive trade.

“County lines destroys lives and the futures of impressionable, young people who really do deserve better than being manipulated into carrying and selling drugs across the UK and in their local areas.

“The Constabulary have done a fantastic job this week, this really sends the clear message that drug dealing and trafficking will not be tolerated in Cumbria.

“I would urge the public to play their part in this fight, we can all help; please report any suspicious behaviour to the police on 101 or 999 in an emergency or report it anonymously to Crimestoppers on 0800 555 111.”

COUNTY LINES – WHAT IS IT?

– County Lines is the name given to a drug dealing model which involves criminals using phone lines to facilitate the supply of Class A drugs, normally between a major city and another county. The single phone line becomes the county line’s ‘brand’.

– County lines is complex – it is important to understand it is not a crime type but a distribution model. It is the catalyst for a range of crime including modern slavery, violence and anti-social behaviour.

– Some of the tell-tale signs of county lines are an increase in visitors or cars to a house or flat, regularly changing residents, signs of substance misuse or evident drug paraphernalia.

– If you notice suspicious activity or have information about county lines drug dealing you can speak to police on 101 or call 999 in an emergency.cum