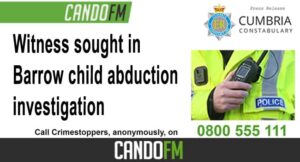 Officers investigating an alleged attempted abduction of two children aged under 10 at Barrow Park are keen to trace a witness.

Officers need to hear from the woman – who reported it to the children’s mother and the park ranger – as she can provide important information to assist officers in their investigation.

The woman officers would like to hear from was blonde and wearing a beige coat. It’s believed she was with a man and a girl.

If you are this woman, or you know who she is, please contact Cumbria Police as soon as possible.  You can report online at www.cumbria.police.uk/reportit , quoting incident number 76 of 29th December 2021. You can also phone on 101.

Officers have arrested a man aged in his 40s and from Barrow on suspicion of attempted child abduction. He is currently in police custody.