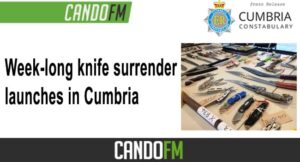 A week-long surrender is providing people in Cumbria the chance to hand in unwanted knives.

Operation Sceptre is being run as part of a national drive to tackle knife crime and stop potentially dangerous blades falling into the wrong hands.

The surrender, which will apply countywide, will run from Monday 8th and Sunday 14th November.

During this time, members of the public will be able to anonymously hand in unwanted knives, including knives that are prohibited, to surrender bins at police station front counters.

Knife surrender bins will be available at the following police stations:

Anyone wishing to bring knives or weapons for destruction should consider how they are transported to police stations. Please bring them wrapped up or boxed so that they remain safe while being carried. If in doubt, please contact by our online reporting for or speaking to an officer on 101for further advice.

Officers will also be engaging with retailers to provide further guidance on their legal duty to ensure knives are not sold to young people. It is illegal in the UK to sell a knife or similar bladed article to a person under the age of 18.

He said: “Every knife that is handed in to us is one less knife that can be used to hurt somebody – or worse take their life.

“Cumbria has had a number of high-profile knife-related incidents in recent years, and we have all seen the impact this has on people’s lives and wider communities.

“We work closely throughout the year with partner agencies across the county to tackle knife crime In Cumbria. We do this by enforcing the law and we also work to tackle the problem through education.

“We want to educate people from an early age about the dangers of carrying a knife and getting involved in violent crime.

“I would encourage anyone who has a knife that they want to safely dispose of to take this opportunity to do so.

“There are many risks when you carry a knife, not only do you put yourself at risk of serious injury, or death, you could also face a £5,000 fine and four years in jail – even if you don’t use it.”

Cumbria’s Police and Crime Commissioner, Peter McCall, said: “Knife crime is a serious issue and no one wants to see someone they love get involved in such a dangerous crime, either as a victim or a perpetrator.

“Simply carrying a knife means you are more likely to use it and having unnecessary knives and other sharp weapons lying around only adds to the risk of being involved in a crime.

“I would urge everyone to hand in unwanted knives to these surrender bins – each knife handed in could potentially save a life.

“Let’s work together and make Cumbria a safer place for everyone.”

If you are worried about someone you know carrying a knife, help and guidance is available:

Call 999 straight away if there is an ongoing incident involving a knife or offensive weapon.