Wanted: Have you seen this man? 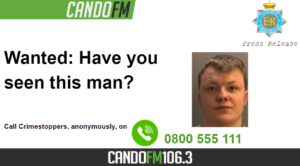 WANTED: HAVE YOU SEEN THIS MAN?
Officers are requesting the public’s help in locating a man wanted for a breach of bail, common assault, public order and the aggravated theft of a motor vehicle.
Robbie Archer, aged 21, was last seen in the Barrow area on 2nd January. Robbie has links to Barrow but could have travelled to any location.
Robbie is described as 5ft 8in tall, of stocky build and short ginger hair. He was last seen wearing black joggers and a dark coloured hoody.
Anyone with information on Robbie’s whereabouts is asked to contact Cumbria Police on 101.
Alternatively, if you prefer to remain anonymous, you can contact the independent charity Crimestoppers on 0800 555 111.