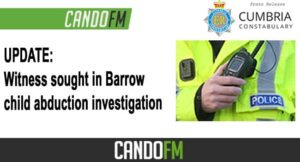 Following an appeal to the public made yesterday (29 Dec), detectives have received positive responses from the public.

Officers remain keen to hear from anyone else with any other information which could assist. If you can help, please contact Cumbria Police as soon as possible.  You can report online at www.cumbria.police.uk/reportit , quoting incident number 76 of 29th December 2021. You can also phone on 101.

A man in his 40s and from Barrow was arrested on 29 December. He has been arrested on suspicion of attempted child abduction relating to the incident at Barrow Park and a second incident of attempted abduction, alleged to have taken place in Marsh Street in Barrow on 17 December.