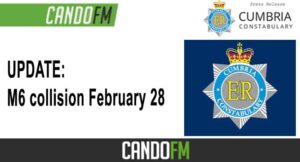 Police have formally identified one of the people who died in a collision on the M6 on Monday (February 28).

Florentin Lepadat, 51, of Rochdale, died at the scene of the collision, which happened on the northbound carriageway between junctions 39 and 40 at 11.18am.

Mr Lepadat was travelling  in a Volkswagen Passat, which was involved in a collision with a white Mercedes Luton van.

Despite efforts by members of the public on the scene, Mr Lepadat was pronounced deceased at the scene.

Another person in the Passat was also pronounced deceased at the scene.

This second person has yet to be formally identified. But officers are working with a family in the Rochdale area and hope to be able to make formal identification soon.

A third person in the car, a man, 31, was taken by ambulance to the Cumberland Infirmary in Carlisle, where he is described as being in a stable condition.

The driver of the van was a man, 31, from the Gloucestershire area, who was taken to the Cumberland Infirmary by ambulance and later discharged.

A passenger in the van was also taken to the Cumberland Infirmary and later discharged.

Officers continue to appeal for information about the collision.

Police are keen to hear from anyone travelling on the M6 north or southbound on Monday February 28, between 10am and 11.30am, with dashcam.

They are asked to make contact with PC 2052 Whatman at SCIU@cumbria.police.uk

You can also report online at www.cumbria.police.uk/reportit – or you can phone on 101.