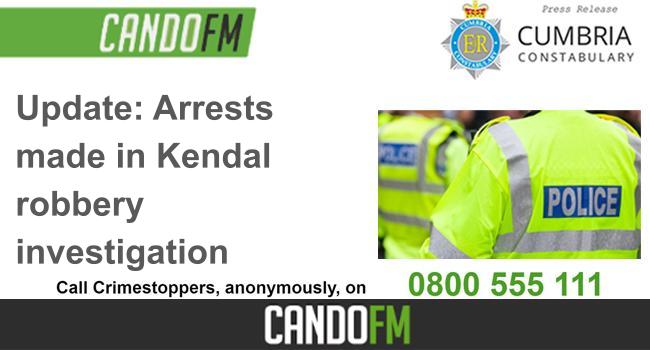 Two people have been arrested as part of an investigation into a robbery at a Kendal store.

A man and woman, both aged in their early 40s and from Merseyside, have been arrested on suspicion of robbery.

They remain in custody for questioning.

Anyone with information can report it online at www.cumbria.police.uk/reportit [1] , for the attention of DC 2923 Lewis, referring to incident 158 of May 19.

Police are keen to speak to these two people as part of investigations into a robbery at Spar in Sandylands Road, Kendal, today.

Officers received a report of a robbery at the shop at 3.48pm, during which money was stolen.

Investigations are underway and detectives have issued pictures of these two people as part of their enquiries.

Officers are also appealing for any dashcam footage that might help or information about vehicles passing or nearby at the time.

Detectives believe a silver Volkswagen Polo may have been used in the execution of the robbery and it was parked outside at the time of the robbery.

Anyone with information can report it online at www.cumbria.police.uk/reportit [2] , for the attention of DC 2923 Lewis, referring to incident 158 of May 19.