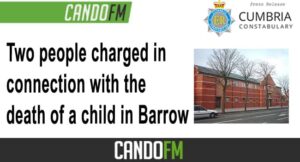 Two people have been charged in connection with an investigation into the death of a one-year-old boy in Barrow.

Laura Castle, 38, from Barrow, has been charged with murder.

Scott Castle, 34, from Barrow, has been charged with causing or allowing a person’s death.

Both have been remanded in police custody and are set to appear at Barrow-in-Furness Magistrates’ Court today (12 November).

The charges relate to the death of a one-year-old boy who died in January.

Cumbria Constabulary would like to remind everyone that criminal proceedings are live. It is extremely important that there should be no reporting, comments or sharing of information online which could in any way prejudice ongoing proceedings.