Support for contact between adopted children and birth family not fit for purpose, report finds 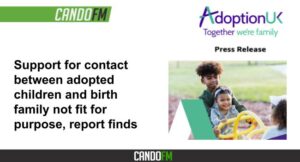 Support for adopted children, young people and adults wanting to establish and maintain relationships with birth relatives is not fit for purpose and requires radical improvement, a new report reveals today.

The Adoption Barometer report  (attached below) published by the charity Adoption UK, shines a light on the challenges facing some of the UK’s most vulnerable children as they seek to navigate complex relationships with birth relatives. Adults who were adopted in childhood are also struggling with the legacy of poorly supported contact, and inadequate services to help with tracing relatives.

Most people adopted in recent decades will have direct or indirect contact with their birth family at some point in their lives, either decided by the courts when they were adopted, or through an informal arrangement.

Only 12% of adopters had been offered any training or advice about establishing direct contact after adopting their child. Among adopters whose children were having direct contact, 85% said that their agency does not regularly review their contact arrangements, and 86% said their child had not been offered any emotional or therapeutic support related to their contact arrangements.

The importance of well-managed contact was highlighted in the government’s National Adoption Strategy, published last year, and was the only significant reference to adoption in the recent Review of Children’s Social Care in England.

Adoption UK is calling for free national contact services to be set up for adopted people from childhood into adulthood, in each nation of the UK.

When Frankie* was 14 she discovered her birth mother’s name and made contact by herself. When she confided in her family’s social worker, she was told it was a ‘stupid decision’.

Frankie said: “I’m pleased I instigated contact, but unfortunately it has now broken down, so I feel very rejected. There should be way more support for adopted young people who want to contact birth relatives. I also think we should be allowed to make contact when we want, rather than having to wait, and our choices should not be labelled as wrong.”

(For more information on this case study and other case studies who are willing to provide media interviews, see Case Studies File, attached, below).

The report found that more than a quarter (28%) of 13-18-year-olds had direct contact with a birth family member, outside of any formal agreement, during 2021.

Report author, Adoption UK’s Rebecca Brooks, said: “Contact with birth family is an important part of many adopted children’s lives and often looms large during adolescence and early adulthood, when people are exploring their identities. But too often, the preparation and support available does not meet the needs of adopted children, their parents, or their birth relatives.

“Contact plans made at the time of a child’s Adoption Order can go out of date very quickly as circumstances change and children grow older. Later, families can find themselves navigating complex situations without the support they need, with devastating impacts on children’s mental health and family stability.”

Only 17% of adopted adults surveyed received professional support when they were children, to help with birth family contact. Around a third (37%) were offered counselling as part of the process of tracing birth relatives in adulthood, half (52%) of whom said it felt like a tick box exercise. Respondents described the process of tracing as “frustrating,” “costly,” “full of red tape,” and stressed the importance of long-term support after the initial reunion. Many expressed concerns that went beyond their own experiences, calling for a complete overhaul of the system.

Despite the complexities of navigating contact with birth family, 80% of adopted adults who had contact during childhood were glad to have had the chance to do so. The majority (69%) who did not have this opportunity, or did not pursue it, were regretful about it.

Data from the report shows that the majority of adopted people (75%) and prospective adopters (70%) think contact with birth family should be normalised, even though it can prove to be both daunting and difficult. The figure amongst adopters is lower, but half still agree that contact should be normalised. Informal contact with birth relatives amongst adoptive families with 13-18-year-old children, has increased steadily over the four years of the Barometer.

Mrs Brooks added: “Traditionally adopters are characterised as being resistant to contact with their children’s birth family, but repeated Barometer reports have shown this is simply not the case. There is increasing openness towards it, if the right support is available.”

For the fourth year running most (76%) Barometer respondents said they face a continual struggle for support in many areas of their child’s life, including contact. The survey results also highlight the consequences of failure to provide early and consistent support for adopted young people. More than a fifth (22%) of 16-25-year-olds were not in education, employment, or training at the end of 2021 – more than twice as high as the UK average.