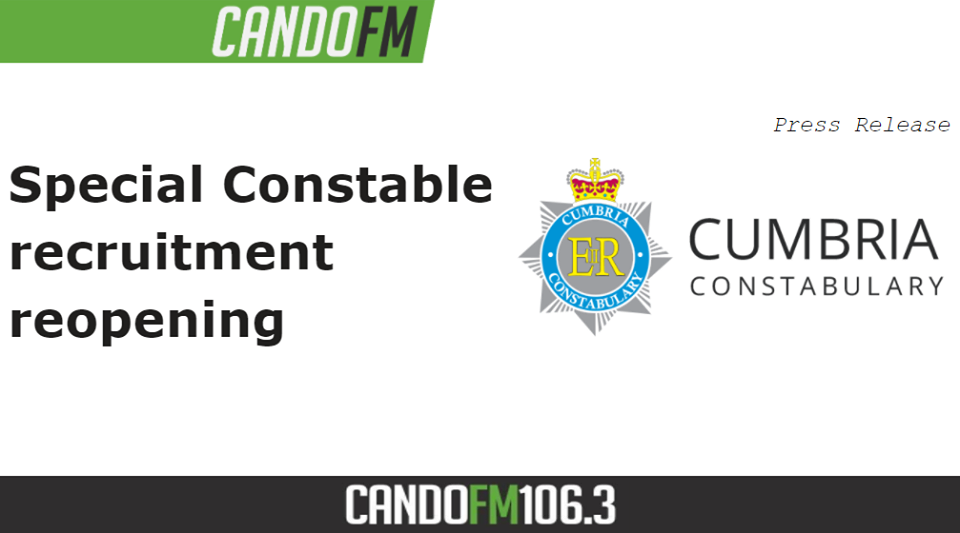 Cumbria Constabulary is reopening recruitment for volunteer Special Constables and is holding a Q&A session on twitter in March.

Applications for Special Constables will be welcome from Monday 15th Feburary. Those interested in applying or looking for more information should visit – Join us (cumbria.police.uk) on Monday.
The Q&A session is being run on the @CumbriaSpecials twitter account on 3rd March between 6pm and 7pm.

This is an opportunity for people to find out more about the role from specials and officers who support the special constable role.
Superintendent Lisa Hogan, Head of the People Department said, “Special Constables are an asset to the Constabulary.

“Specials work alongside our regular officers supporting them in their day to day work and play a vital role in fighting crime, making our streets safe and working for the benefit of the community in which they live.

“The role is incredibly rewarding and flexible depending on your skills and availability.”

Special Constable Jayne Kell, speaking on her time as a special said
“I joined Cumbria Constabulary as a volunteer cadet leader in 2019, I thoroughly enjoy it and still do.

“Having a family, full time job, whilst being a volunteer cadet leader and Special Constable is a balancing act, but it works, and it is absolutely worth it.”

“It is a real demonstration of public service, commitment and selflessness that people were prepared to give their time to help in this interesting and challenging work to support and keep our communities safe.

“They often have local knowledge and have the trust of their local community which is an invaluable trait as a Special Constable.

“Not only will successful applicants be able to apply their expertise to the role, they’ll gain incredible experiences and build strong relationships with their fellow volunteers and Officers.

“I would urge anyone who is interested in helping their local communities to attend the Q&A and apply.”

Special Constables are part-time, volunteer Police Officers, who perform the same duties and wear the same uniform as their regular counterparts.

Specials take part in frontline police work and spend most of their time on the streets, doing intelligence-based patrols in crime hotspots or taking part in crime-prevention initiatives.

This could mean anything from keeping town centres safe at night to conducting house-to-house enquiries or helping prevent vulnerable members of the community from becoming victims of crime.

Specials spend a minimum of four hours a week (16 hours a month) supporting their police colleagues to tackle crime in their communities.

The deadline for applications is the 26th April