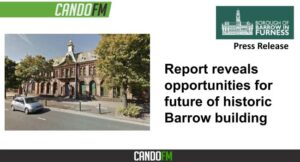 An expert report has identified a series of options for the future of an historic Barrow building.

The House of Lords building, the former Working Men’s Club and Institute on Abbey Road, is a Grade II-listed structure.

The privately-owned property, which is located within Barrow’s Heritage Action Zone, was subject to a fire in 2017 and is now considered at risk.

A feasibility report undertaken by John Coward Architects has identified a number of opportunities for the building should a suitable developer come forward in the future.

Councillor Ann Thomson, the leader of Barrow Borough Council, said: “The House of Lords building is in a prominent and historic part of Barrow and is currently in a poor state of repair following a fire in 2017.

“The building itself is important to the character of the town’s Conservation Area and, along with many residents, we would like to see it looking smart and being used once again.

“The feasibility report has highlighted some really interesting and ambitious options for the site for the future.

“Any of these options would not only open up a new chapter of life for the building, they would improve the look and feel of the immediate surrounding area which is currently suffering because of the derelict and unsightly nature of the site.”

The money is being used to restore historic shop fronts in Duke Street as well as providing a programme of cultural activities and events delivered through Art Gene to promote and highlight the importance of preserving and celebrating the town’s heritage.

Barrow Borough Council has issued an advisory letter pursuant to S215 of the Town & Country Planning Act, requesting the current owners of the House of Lords building to clear debris and vegetation from areas of the site.

Councillor Thomson added: “Barrow has some fantastic architecture which helps to create the unique and special character of the town.

“The High Street Heritage Action Zone grant has given us an exciting opportunity to explore our built history and, in this instance, has enabled us to fund an expert report revealing possible options for this site in the future.

“These options are hypothetical at this point and would be for the owners or future owners of the site to consider and explore in further detail.” 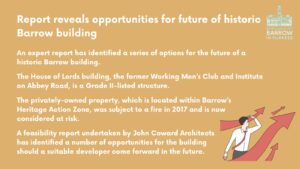