Public asked to be vigilant of phishing scams 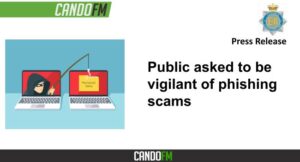 We are urging the public to remain vigilant when it comes to suspicious messages. Text messages and emails impersonating well-known organisations remains a common tactic used by criminals.

SERS was launched by the National Cyber Security Centre (NCSC) and the City of London Police in April 2020 to enable the public to forward suspicious emails to an automated system that scans them for malicious links.

The most impersonated organisations in phishing emails reported last year were the NHS, HMRC and gov.uk.

“There are simple steps that people can take to protect themselves from phishing.

“It’s important to be vigilant if you receive a message, you weren’t expecting and you think it might be a scam check with the company before responding.

“If you have family and friends that aren’t tech savvy please make them aware of such scams so that they know how criminals work to trick individuals into giving their details.

“We’d encourage you to report these scams to Action Fraud so forces can act to fight them and prosecute criminals.”

“Phishing scams continue to pose a significant threat for both individuals and businesses. I would urge everyone to be vigilant of unexpected messages or calls that ask for your personal or financial information.”

“If you receive a call or message that you think might be a scam, don’t respond to it. Instead, contact the organisation directly using contact information from the company’s official website, and not the links or numbers provided in the message itself.”

“Remember, your bank, or any other official source, will never ask you to supply personal information via email or text message.”

Mobile network providers also offer a service that allows customers to report suspicious text messages, by forwarding them to the number 7726.

The service is free of charge and enables providers to takedown malicious websites and block malicious texts from being sent across their network. As of 31st May 2022, 13,000 scams have been removed as a result of suspicious text messages reported using the 7726 service.

‘Phishing’ or ‘smishing’ is when criminals use scam emails, text messages or phone calls to trick their victims. Whether it’s an email asking you to “verify” your bank account details, or a text message claiming you’ve been in close contact with someone that’s got COVID-19, the goal is usually the same – to trick you into revealing personal and financial information.

Fake emails and texts can be difficult to spot as criminals are constantly getting better at creating genuine-looking messages .

Here’s some practical advice you can follow when it comes to dealing with phishing scams:

1 – If you have any doubts about a message, contact the organisation directly.

Don’t use the numbers or address in the message – use the details from their official website. Remember, your bank (or any other official source) will never ask you to supply personal information via email.

2 – If you think an email could be a scam, you can report it by forwarding the email to: report@phishing.gov.uk. Send us emails that feel suspicious, even if you’re not certain they’re a scam – we can check.

3 – Most phone providers are part of a scheme that allows customers to report suspicious text messages for free by forwarding it to 7726. If you forward a text to 7726, your provider can investigate the origin of the text and arrange to block or ban the sender, if it’s found to be malicious.

4 – If you’ve lost money or provided personal information as a result of a phishing scam, notify your bank immediately and report it to Action Fraud at www.actionfraud.police.uk or by calling 0300 123 2040. In Scotland, call Police Scotland on 101.

NFIBs Cyber Protect team also advises that the public follow the advice of the Take Five to Stop Fraud campaign to keep themselves safe from fraud.

“Never let yourself be rushed. If someone contacts you saying they’re HMRC, wanting you to urgently transfer money or give personal information, be on your guard.

“Tax scams come in many forms. Some threaten immediate arrest, others offer a rebate. To help us fight these crimes, please forward suspicious texts claiming to be from HMRC to 60599 and emails to phishing@hmrc.gov.uk. Report tax scam phone calls to us on GOV.UK.”