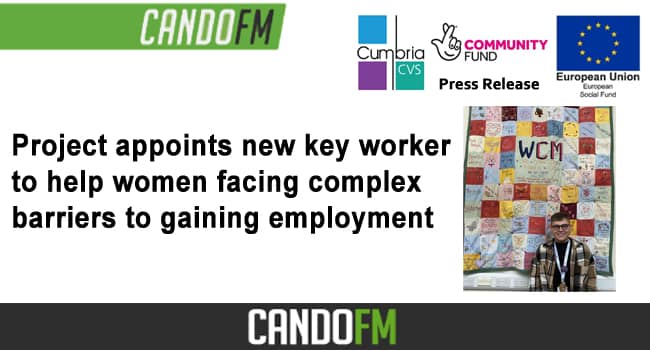 A project which supports people who face multiple and complex barriers to gaining employment has appointed its newest key worker.

The Building Better Opportunities Getting Cumbria to Work (BBO GCtW) project supports people in the Barrow and South Lakes area aged 18 and above, who are either unemployed or economically inactive and are furthest removed from the labour market.

It has appointed Oliver Moore, 24, to be key worker for the project at one of its delivery partners, Women’s Community Matters, which is based at the Nan Tait Centre at Abbey Road, Barrow.

Oliver’s role is to support women in the Barrow and South Lakes area to move a step closer to potential employment.

“There are limited resources and high levels of unemployment in Barrow and a lot of women who have not been in education or training,” said Oliver, who lives in the town.

“Some of them think because they have not got any qualifications, they won’t get a job but we can do so much to support them.”

He stressed the project’s work was not all about getting someone a job – that was the end goal. “A lot of the women who come into the centre have a lot of diverse needs and issues going on in their lives and, in many cases, it is about getting people a step closer to employment.

“That might start by me signposting them to some of my colleagues, who can provide emotional and self-esteem support and courses. It is about building them up.”

Oliver said various activities were available, including gong baths – a relaxing meditation involving a gong – and a walking with alpacas’ session would take place soon to give participants a new experience and build their confidence.

He said the project could help participants with writing a CV or teach them how to sign up and use online job sites.

And if they had a specific interest – such as working with children or in the hospitality or retail sector – BBO GCtW had links with organisations which could supply relevant training and the project could often fund it.

“The BBO GCtW project will try to do whatever it can to meet a participant’s particular needs or wants,” said Oliver.

In the past four years the BBO GCtW project has supported around 90 women through its partnership with Women’s Community Matters.

“A lot of women we work with might not have any support or positive influences in their life,” said Oliver. “They might feel low, with no sense of direction.

“Some of the women we work with have been victims of domestic abuse and violence; some have mental health issues and others have young children or are single parents. A lot of people might not have access to money and cannot afford wi-fi, laptops and printers to help get themselves into work but we have that equipment here.

“Working with the BBO GCtW project is life-changing for certain participants. Without the programme they would not have been able to move on their lives.”

Various new initiatives are in the pipeline at Women’s Community Matters. A drop-in event will be held in July. This is aimed at attracting potential participants who might not have previously heard of the project.

A special event will be held at the Nan Tait Centre on June 8 to celebrate the achievements of those who have now left the BBO GCtW project.

And ‘Conversation Cafes’ are planned, including one at Barrow’s Green Heart Den on June 9. This will be for active and previous participants to provide feedback about what they enjoyed and anything they would have like to see done differently. The information will be used to help the BBO GCtW project evolve in future.

If any women in the Barrow and South Lakes area are interested in learning more about how the BBO GCtW project might be able to help and support them at Women’s Community Matters they can contact Oliver Moore so 01229 311102.

“We offer a safe space for women with the vast majority of staff being female workers,” said Oliver.

The BBO GCtW project works with both men and women in Barrow and the South Lakes. It is funded by the European Social Fund and the National Lottery Community Fund and led by Cumbria Council for Voluntary Service (CCVS) in partnership with four charitable organisations – The Well Communities, Right2Work, Women’s Community Matters and Cumbria Alcohol and Drug Advisory Service (CADAS).

For more information about the project visit www.gettingcumbriatowork.org.uk or search for Building Better Opportunities Getting Cumbria to Work on Facebook.