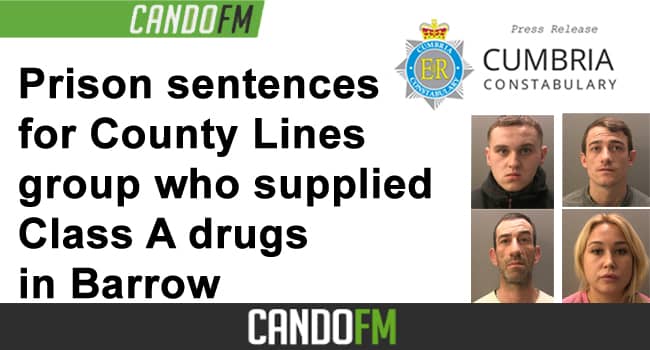 A group involved in County Lines organised crime who were involved in dealing Class A drugs in the Barrow area have been sentenced, with one jailed for more than 11 years.

The defendants were sentenced yesterday (26 April 2021) at Preston Crown Court after pleading guilty to Conspiracy to Supply Class A drugs (heroin and crack cocaine) between 6 December 2019 and 18 April 2020.

Jack Hartley, 27, of Maddocks Street, Liverpool, was sentenced to a total of 11 years and three months in prison.

Cameron Beedles, 21, was sentenced to a total of five years and four months in prison.

Brendan Purcell, 46, of Earle Street, Barrow, was sentenced to a total of four years and 10 months in prison.

A 17-year-old from the Merseyside area was sentenced to a Youth Rehabilitation Order for his role in the conspiracy.

The Court heard how the defendants were part of a Merseyside Organised Crime Group involved in the establishing of sophisticated enterprises selling Class A drugs – heroin and cocaine – in South Cumbria.

A number of mobile phone lines were central to the investigation which has resulted in the group being sentenced.

The first arrest in the case was made on 3 January 2020, after officers witnessed a suspected drug deal in the area of Keyes Street in Barrow, involving someone on a bicycle. That person was then seen to enter then leave an address in Vernon Street.

Other items seized included a burnt spoon coated in a white substance, a number of large knives, plastic wraps, a debtors list and train tickets between Liverpool and Barrow.

Whilst officers were at the address there was evidence of Jack Hartley attempting to contact Beedles on his, now seized, phone.

However, despite the intervention of police, the drugs line continued to operate.

On 8 January 2020, the 17-year-old was arrested at Lancaster railway station. He said he was making his way between Liverpool and Barrow and officers suspected he was involved in drug supply.

On 5 February, 2020, Merseyside Police stopped Jack Hartley leaving an address in Cowper Road, Liverpool. Officers searched the address – belonging to Amy Johnson – and two phones suspected of being used to deal drugs in Barrow were recovered.

Also found at the address was paraphernalia associated with drug use including bags of white powder later shown to be phenacetin – an adulterant of cocaine. Also recovered were scales with a brown powder on them.

A train ticket between Dalton-in-Furness and Liverpool was also recovered.

Despite this intervention from police, text messages continued to be sent out to drug users in the Barrow area.

On 16 April 2020, police in Cumbria and Merseyside executed simultaneous warrants at three addresses – Earle Street in Barrow and Cowper Road and Maddox Street in Merseyside.

Brendan Purcell was arrested at Earles Street on suspicion of conspiracy to supply Class A drugs. Officers recovered more than £2,000 stuffed in a sock under his duvet and two phones shown to be involved drug supply in Barrow.

Amy Johnson and Jack Hartley were arrested at Cowper Road. As officers arrived, Hartley was seen to attempt to leave via the rear and then throw a mobile phone onto a nearby roof. That phone was recovered.

As part of the investigation, Amy Johnson’s bank accounts were analysed. She was found to have received in excess of £5,000 from Purcell over a six-month period.

“The sentencing of these individuals follows a lengthy and complex investigation by detectives specialising in drug dealing offending.

“The team in Cumbria worked closely with colleagues in Merseyside to ensure vital evidence of Organised Crime activity was recovered which has led directly to the significant sentences handed down.

“This sentencing once again shows that Cumbria is no soft touch for drug dealing. Detectives here are experienced in investigating such offences and have a proven track record in securing significant sentences for those who seek to prey on vulnerable drug addicts.

“The police are also applying for a Serious Crime Prevention Order against Jack Hartley.”