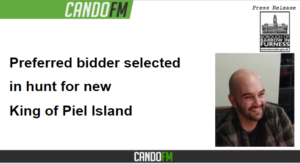 PREFERRED BIDDER SELECTED IN HUNT FOR NEW KING OF PIEL ISLAND
The search for a new landlord to run one of the UK’s most unique public houses has taken a step forward – with the selection of a preferred applicant.
Earlier this year, a tender was launched for a ten-year lease to run The Ship Inn, on Piel Island, sitting half a mile off the Furness coast in Barrow-in-Furness.
More than 190 individuals registered an interest in the opportunity, with in excess of 30 ultimately submitting an application.
The tender process has now moved to the next stage, with Barrow man, Aaron Sanderson, selected as the preferred bidder.
Mr Sanderson, an electrical team leader at BAE Systems Submarines, said he is looking forward to pulling his first pint at The Ship Inn once the season begins.
He added: “Many people have been sad to see the pub closed and I’m looking forward to getting it back up and running and serving visitors; that’s how it should be.
“I have very happy memories of visiting Piel many times as a child and throughout my life. The prospect of me applying for the role was mentioned and from that point I couldn’t get it out of my head.
“Personally, it represents both an incredible risk and a wonderful opportunity. I am in a secure and well-paid role, but I am willing to give that up for the chance to bring the glory days back to The Ship Inn.”
Mr Sanderson, aged 33, plans to move to the island with his partner Anita Palfi. A date for the official reopening is yet to be confirmed.
The opportunity to run The Ship Inn was advertised on Government procurement portal The Chest in January.
It gathered international attention because of an historic tradition that sees the landlord of the pub also crowned as King of Piel in a ceremony that involves alcohol being poured over the incoming publican’s head.
Councillor Ann Thomson, the leader of Barrow Borough Council, which is the custodian of Piel Island and its pub, said: “This was a very competitive process and we are delighted to be moving to the next stage with our preferred bidder.
“Aaron has a great understanding of Piel, The Ship Inn and the traditions of the island. We will now follow due process as we move through the official channels to confirm our partnership and very much look forward to The Ship Inn being open this year and to seeing Piel Island resplendent with visitors and holidaymakers.”
Piel Island, which is only 50 acres in size, hosts an array of wildlife and is home to the ruins of Historic England-run Piel Castle, a now derelict structure built in the 14th Century.
Visitors can also stay overnight at the island’s campsite or by booking accommodation at The Ship Inn.
The island is reachable via a short ferry crossing from April to September while planned guided walks across the sands also take place during days of finer weather.
A number of changes and improvements are due to take place on the island from 2022 onwards, including replacing the existing toilet block and considering alternative energy generation as part of the ongoing Low Carbon Barrow project.