Policing team awarded for their contribution to society 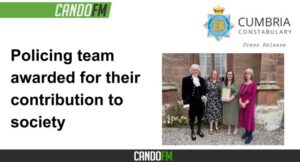 The policing team that coordinates the many voluntary roles and schemes within the county’s police service has been recognised for their contribution to creating positive futures for young people.

The Constabulary’s Citizens in Policing team were recognised at an awards ceremony held by the High Sheriff of Cumbria, David Beeby.

The award was in recognition of the ‘great and valuable contribution to enhancing the life of your community and making a difference to people’s lives’.

“This award is recognition of a wider team effort and could not possibly be achieved without the help of all those who volunteer to support our communities.

“Mr Beeby paid a visit to us last year to see the work of our cadets, who work with our officers in conducting neighbourhood policing initiatives.

“We are really pleased to receive this award and hope to build on the work of all our volunteers to continue making a positive difference for all.”

“The work of our Citizens in Policing team and our amazing volunteers is one which we value highly.

“Those who give up their own time to help us keep people safe are inspiring and their achievements should rightfully be recognised.

“I was extremely proud to join some of our team when attending the High Sheriff’s awards ceremony recently. It was also a privilege to hear of the work of other voluntary services who were also commended at the event.”

Cumbria’s Police and Crime Commissioner, Peter McCall, said: “The Citizens in Policing team do a fantastic job in co-ordinating the volunteers and the work that they do really is invaluable to the community.

“It’s a great example of partnership working to create an even safer Cumbria and that is something that should be recognised and celebrated.

“Well done to everyone involved – this award is well deserved and I look forward to seeing what the team achieves in the future.”

Recruitment for cadets is currently open. The scheme aims to give young people, between the ages of 13 and 17, the opportunity to develop their qualities and skills through a structured programme and to enhance the relationship between the public and police.

“I would encourage any young person who would like to make a difference to their community to consider applying. Cadets learn about the law and our specialist police departments as well as taking part in local community events.

“Being a cadet is an enjoyable role and one which provides you with a number of life skills which support any future aspirations.”

For more information on the role of our cadets, please visit: Cumbria Police Cadets – Cumbria Constabulary.