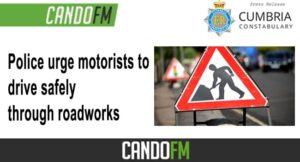 Cumbria Constabulary’s roads policing officers are assisting National Highways this week as staff resurface the carriageway along the A66 between Stainmore and Brough.

There have been some near misses reported by the workforce at the sites.
The roadworks are only in place during the night and officers are asking motorists to allow extra time for their journey and to comply with any speed limits, traffic lights and convoy vehicles.
Police will be deploying marked and unmarked vehicles along the A66 at various times this week to ensure the safety of the staff working within these sites.