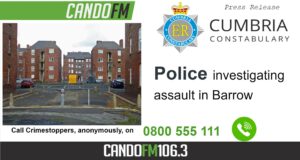 Police are investigating an assault reported to have happened in Egerton Court, Barrow, yesterday (Thursday February 4).

At about 3am, the North West Ambulance Service and police attended this location, where a local man was found collapsed on the pavement outside block 10.

The man, 44, had sustained leg and spinal injuries.

He was transferred to Royal Preston Hospital where he remains in a stable condition. His injuries are described as serious but his condition has improved.

Enquiries led to the arrest of two men, aged 40 and 43, and a 44-year-old woman. All have been bailed while investigations continue.

Detectives from south Cumbria’s Crime and Safeguarding Team are still keen to trace witnesses and are appealing to anyone with relevant information to make contact on 101 or via Crimestoppers, anonymously, on 0800 555 111