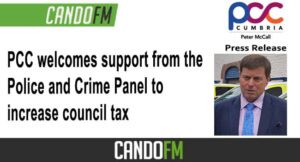 Cumbria’s Police and Crime Commissioner, Peter McCall has received unanimous support from the Police and Crime Panel on the proposals to increase the policing element of the council tax precept at a meeting on 25th January.

Each year, Cumbria Constabulary is part funded by government grants and the rest is funded by residents of Cumbria, through what is called the police council tax precept, and together this provides funds for policing and keeping us all safe.

In common with most other forces in the country, the Commissioner proposed that the policing part of the council tax precept be increased by 65p a month for a Band B property.  In Cumbria, the largest number of properties fall into a Band B.

Police and Crime Commissioner, Peter McCall said: “I am grateful to not only have the support of the Police and Crime Panel for this modest increase, but also agree with the Panel Members, in that we are extremely reluctant in making this decision.

“I am very well aware that with inflation at 5.4% and possibly rising in the short term, many people are struggling with bills and any increase in council tax is of course unwelcome.

“I have to balance this with the need to ensure that the Police Service on which we all rely, has the resource to do its job in keeping us all safe.

“We are seeing a very real increase in the number of offices in Cumbria, crime is down and I want to see this trend continue as I’m sure, so do the public.

“Unfortunately, the increases in costs due to inflation affect delivery of policing too. The only alternative to this increase in precept would be a reduction in service. I don’t believe anyone would wish to see that, and I believe this is reflected in the positive support from public consultation.

“It is entirely reasonable that the public should expect to see value for their money and over the last eighteen months, we have seen officers deployed into smaller towns across the county where they have not been based for many years.

“In the coming months, the Constabulary will be continuing to invest in neighbourhood policing where I believe the public will start to see and feel the effect, though I should add that the recruiting, training and probation period for officers does take some time.

“In Cumbria, our Police are highly graded by Her Majesty’s Inspectorate of Constabularies and Fire & Rescue Services, and the approval of these budget proposals, will support the high-quality police service, help us to continue to improve it and build long-term resilience to keep us all safe.”