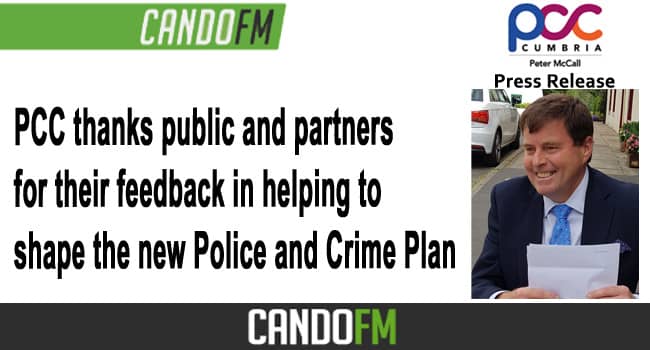 Cumbria’s Police and Crime Commissioner, Peter McCall thanks the public for their support and feedback that will help to develop his second Police and Crime Plan, due to be published in the Autumn. The recent consultation survey collected the views of 545 people living and working in Cumbria, asking what they considered to be the policing priorities in the area where they live.

The draft plan is being developed, following analysis of national reports and crime trends, public feedback from the Commissioner’s public engagement, and recent feedback from victims, including the recent hate crime survey.

Peter McCall comments: “I would like to thank the hundreds of respondents that took the time to provide feedback by completing this survey.

“Making sure the voice of the public is carefully considered when developing ideas and making decisions, is essential.

“The feedback, viewpoints and opinions we have from local residents, means we will be able to design a plan that accurately reflects the needs of Cumbria communities.

“With the feedback from members of the public, the Constabulary and partner agencies input, and the support of the OPCC office, we will be developing a draft plan that will be presented to the Police and Crime panel in October.  The plan will be published on my website, later this year.”