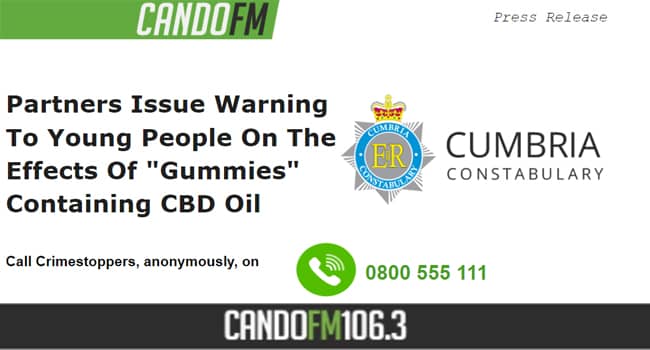 Cumbria Police’s Child Centred Policing teams have been made aware of a number incidents across the country involving young people taking “sweets” or “gummies” containing unknown ingredients, but believed to include CBD oil. Reports are not being treated as connected.

A number of young persons across the country, including one teenager from Cumbria, have been reported to have been hospitalised, having suffered adverse reactions after consuming these gummies.

“These reports are concerning. Recreational cannabis use in children and young people is increasing both locally and nationally, especially in ‘gummie’/ vape form.

Drugs from unregulated sources are dangerous and may contain other harmful substances which can cause seizures (fits), severe allergic reactions, hyperthermia, heart problems, breathing problem, bleeding from the stomach/food pipe and in some cases can even lead to cardiac arrest ( heart stopping) and death.

“I would urge children and young people to stop and think before considering taking cannabis in any form but especially when the source is unknown.”

“We have received a number of reports that young people, across Cumbria, have been consuming “gummies”. The reports include young people being sold them by peers and accessing them from unregulated sources.

“In light of these worrying reports, we would urge young people to avoid contact with people selling these gummies so they can keep themselves safe and out of trouble.

“We hope by speaking about the dangers, we can raise awareness and deter others from taking the same course of action.”

Dr Schofield explained that cannabis has a long list of side effects including:
• feeling drowsy, tired or lethargic
• feeling faint or sick
• having problems with memory or concentrating
• experiencing mild hallucinations
• feeling confused, anxious or paranoid
• feeling wheezy or out of breath
• developing an uncomfortable or painful cough
• making symptoms of asthma worse in people with asthma
• reduced ability to drive or operate machinery safely
• If you drive while under the influence of cannabis, you’re more likely to be involved in an accident.

The above symptoms are also worse if cannabis is combined with alcohol.

Other side effects include:
• Excess consumption of gummies can cause diarrhoea.
• increases the risk of developing a psychotic illness, such as schizophrenia,
• can cause infertility and may harm unborn children if used during pregnancy.
If children and young people need any support in stopping cannabis or want further information on the harmful effects of cannabis then please refer to the following:
• see a GP
• visit Frank’s Find support page
• call Frank’s free drugs helpline on 0300 123 6600
• Marijuana Anonymous is a free self-help group. Its “12 step” programme involves stopping using marijuana with the help of regular face-to-face and online support groups. You can call them on 0300 124 0373 (callback service).