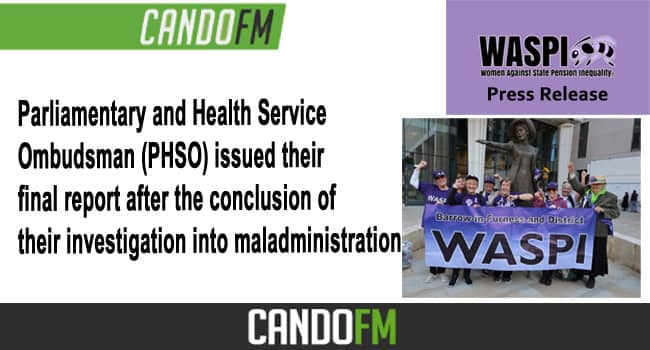 Barrow in Furness women’s pension campaigners give qualified welcome to Ombudsman’s
finding of maladministration and seek a fair and fast solution
to the Parliamentary & Health Service Ombudsman’s finding of maladministration against the
Department for Work and Pensions
The Ombudsman has ruled that the Department was guilty of maladministration from 2004
onwards when it failed to contact 1950s born women in person to inform them of the changes to
their State Pension Age after its own research revealed that the majority of women did not know
their State Pension Age had changed, despite a publicity campaign
.
“We are very pleased that, after a long and thorough investigation, the Ombudsman has found
that maladministration took place when we were not properly notified of the changes to our
State Pension Age, “ said (Catherine & Patricia) from Barrow Women Against State Pension
Injustice (WASPI).
“This is a very welcome step in the right direction. We hope the Ombudsman will now complete
the next stage and decide that an injustice has taken place that deserves compensation. The
government will then have a moral duty to put things right. We are looking for a fair and fast
solution.”
Over the past two years many thousands of women in have lodged complaints with the help of
WASPI members.
The Ombudsman’s final ruling will apply to all 1950s born women affected by the changes, not
just those who have lodged a complaint.
Our local MP( SIMON FELL ) has been quoted this week sayings he’s still supporting us and
that his pleased for this moral victory