Over 100 drivers arrested during drink and drug drive operation 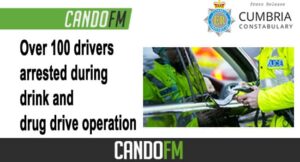 Over 100 drivers were arrested during a drink and drug driving campaign which ran throughout December.

Our officers work all year round to make our roads safer, unfortunately drivers continue to put the lives of others as well as their own lives at risk of death or serious injury and face the consequences of losing their license, losing their job, going to court and prison.

During the festive period people tend to have a drink to celebrate but even one drink can lead to tragic consequences.

During the December campaign officers conducted 349 breath tests, of those tests 42 drivers were over the prescribed limit and one arrested for driving whilst unfit through drink

In December 2020, officers arrested 141 drivers for drink and drug offences.

The figures also highlighted of those tested positive for drink and drugs 39.37% were aged 35 and over, nationally there has been rising concern over drink and drug driving figures in this age group. Police and partners will look at campaigns to educate this age group of the dangers.

Inspector Laura Williams from the mobile support group said “There has been a slight decrease in the number of arrests compared to last year however drivers are continuing to put their lives and the lives of others at risk.

“We want to make Cumbria’s roads safer, drugs like alcohol can equally have a dangerous impact on your driving. If you are caught, we will look to prosecute and bring you before the courts.

“We will continue to identify and deal with offenders and hope this serves as a stark warning that it just isn’t worth it.”

Cumbria’s Police and Crime Commissioner, Peter McCall, said: “Sadly, every year irresponsible drivers not only risk their own lives by drink/drug driving but also the lives of other innocent people. The consequences of getting behind the wheel whilst unfit to do so could be fatal.

“Drivers need to focus on the fact that their reckless behaviour not only ruins the lives of other road users but also that their careless decision to drive when under the influence, can lead to a criminal record or time in prison.

“The key message, not just for the festive period, but all year round is that drink and drug driving will not be tolerated in Cumbria. If you get caught, you will be prosecuted.”