Ombudsman issues annual review of complaints for the North West 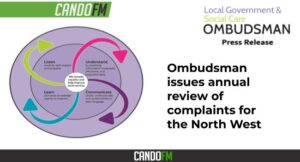 As it increasingly focuses on making wide-ranging recommendations to better council services, the Local Government and Social Care Ombudsman has directed more improvements to local councils in the North West in the past year than ever before.

Launched today, the Ombudsman’s annual review of complaints gives a concise overview of the state of local government complaints over the past year.

The Ombudsman upheld 69% of complaints in the region, which has increased from 65% last year. This year’s data also show:

And although the Ombudsman’s role is to remedy individual people’s problems, it is increasingly looking at how it can make sweeping recommendations on the back of those complaints to help councils learn and improve services for everyone.

In 2021-22, the Ombudsman made 1,848 service improvement recommendations nationally, with all but a vanishingly small number of councils complying (99.7%).

In one case, a council insisted a family pay a top-up fee for a relative’s care home place, despite not offering one where they did not need to pay extra. Following the Ombudsman’s investigation, the council reviewed its processes and reimbursed a further 29 families.

In another case, the Ombudsman found a council was not paying friends and family foster carers the correct allowance. It asked the council to look at whether other foster carers were being similarly underpaid. Six other families received their missed support, and the council put in place changes to ensure this would not happen again.

“One complaint can have immense power to change things for the better, and we’re increasingly focusing on to how we, and the local authorities we investigate, take the learning from those complaints and improve service provision.

“The vast majority of councils agree to the recommendations we make and see them as common-sense ways of providing better services for people in their area. However this can only happen when councils act swiftly when they have committed to do so.

“Unfortunately we are seeing some councils taking longer to make those changes, which put them at risk of making the same mistakes again. In 18% of cases we found compliance was late.

“While I welcome the professional way in which the majority of councils continue to work with us, I would urge those authorities who are having problems to pay close attention to this final, but crucial, step in the complaints process.”

The Ombudsman’s report is published with detailed data for every English authority on how they perform against similar organisations. It also includes resources for councillors and senior council officers to raise the profile of complaints within their organisation.

People can search for their local council’s data using the Ombudsman’s interactive online map, where they can find details of upheld complaints, service recommendations and their authority’s annual letter, detailing how the council has responded to the Ombudsman’s investigations.