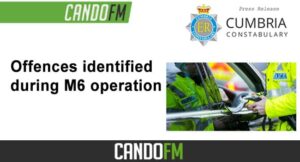 In May officers from the mobile support group took part in a week long (24th – 30th May) Operation Vertebrae on the M6 alongside eight police forces in the north west, Highways and Operation Tramline.

The aim of the operation was to change driver behaviour and reduce the number of collisions on the M6 by highlighting the risks of dangerous driving.

The M6 is the longest motorway in the county. Highways England deals with around 180 reported incidents on the M6 every day. These include a number of traffic collisions, with 4,222 reported on the M6 in 2019.

In Cumbria officers had access to an unmarked HGV for two days during the operation. The HGV is part of Highways England’s Operation Tramline, the cab gave officers an elevated viewpoint allowing them to spot people driving illegally.

During the week the forces camera safety vans and the Driver and Vehicle Standards Agency (DVSA) were also taking part in the operation.

Over the weeklong operation, the following offences were detected

Speaking on the Operation Inspector Steve Vickers from the Mobile support group said “Operations such as this raise awareness and aim to make our roads a safer place.

“The use of the Operation Tramline HGV was a great opportunity to give us an elevated view of those driving on the Cumbria stretch of the M6 and catching those driving dangerously and putting other road users at risk.

“We will continue to work with our partners to raise awareness of road safety and bring offenders to justice.”

Police and Crime Commissioner Peter McCall said “The M6 helps to connect the people, families, workers and businesses within the county and as we approach the summer holidays, will become an extremely busy highway.

“The vast majority of drivers are sensible behind the wheel, but some people and commercial vehicles continue to put themselves and others at risk.

“By driving inconsiderately and taking unnecessary risks, you not only put your own lives at risk, but other, innocent people too – and this is simply not acceptable and will not be tolerated, none of us wants to see more injuries or deaths on our roads.

“We all need to work together to raise awareness of the catastrophic effect that motorway road accidents can have and make sure that our friends, families and colleagues are all aware of the dangers and the potential consequences.”

Highways England Head of Road Safety Jeremy Phillips said: “Our aim through this week of action was to make not only the M6 but all of our roads safer by raising awareness and encouraging motorists to consider their driving behaviour.

“The HGV cabs helped the police to identify hundreds of dangerous drivers who could have caused collisions and harm if they hadn’t been pulled over. While our safety advice given at the motorway services and through the campaign also helped to make the M6 safer.

“We are confident that, working together with our road safety partners, this campaign has helped spread our safety messages to drivers but also raised awareness that those who flout the law can expect to be spotted and action taken.”