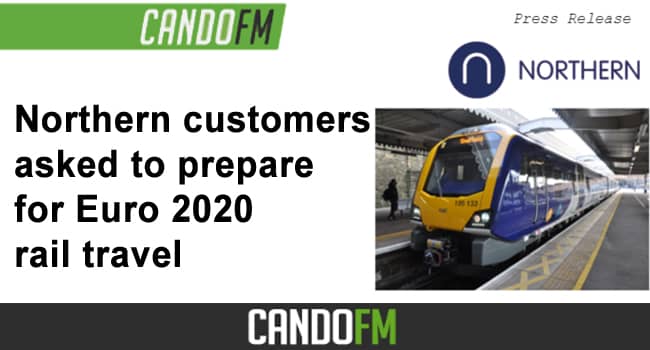 Rail users in the north are being warned to expect busier than usual trains during Euro 2020 which kicks off today (Friday).

Train operator Northern is calling on its customers to carefully consider their journeys throughout the duration of the football tournament.

Matches are being held across the continent, and fan parks have been set up in major cities in the North to allow football enthusiasts to soak up the atmosphere.

A spokesperson for Northern said: “It’s great that so many people will be able to enjoy a festival of football. But we expect our trains to be a little busier than they have been in the recent past as people travel to Leeds, Manchester and Sheffield to access the fan parks

“There are matches on most days between now and the final – on Sunday 11 July – and we’re asking all our customers to plan their journeys carefully during this period and to be prepared for busier services.”

Those who do chose to travel can do so with confidence as Northern continues to provide enhanced cleaning at its stations and on-board its trains.

The spokesperson added: “We know cleanliness, now more than ever, is vitally important for our customers. That’s why we now have more than 600 dedicated cleaning staff working on trains and at stations with a particular focus on touch points (tables, buttons and toilets). Our enhanced cleaning regime is designed to protect customers and staff by reducing the potential risk of transmission.

“And, of course, face coverings are still mandatory (aside from those with specific exemptions) on all trains and at stations.”

When traveling, Northern customers are advised to:

Always wear a face covering when on a train or at a station. (unless specific exemptions apply)

Regularly wash hands before and after travel and use hand sanitiser when on the network.

Take all litter and rubbish off trains and use the bins provided
Be considerate of others.

Respect our staff who are working to keep people on the move
Travel outside of busy hours where possible – avoiding times near to the start or end of matches.

Plan journeys carefully and be aware of train times.

Andrea Williams chats with Joanne Marwood from the Forum

How DID they do that in 1866? Discover the skills of the Victorian artisan!

Andrea Williams chats with Joanne Marwood from the Forum