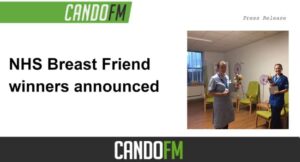 Having a baby is a precious time, but it can also be overwhelming and challenging. Establishing breastfeeding is one of the challenges that new parents face when their baby arrives, and many of us will need a bit of help and support along the way. There might be obstacles to overcome, such as a shallow latch causing pain, or a sleepy baby who doesn’t feed often enough. Health Professionals can play a vital role in supporting parents throughout their breastfeeding journey, from pregnancy until weaning.

The NHS is under immense pressure right now, and so this year SCBS is giving the Breast Friend Award to two people.

‘It was such a challenge feeding my baby and I often felt like giving up. But with Kath’s encouragement and advice I was able to continue and I never felt pressured, she just knew how much I wanted to breastfeed.’

‘She gave lots of tips. She gave me her time. She was the turning point for my breastfeeding struggles’

‘Kath showed me different positions to try and particularly the lying down one (which is now our favourite). She told me to call her whenever I needed and also stayed later after work and made us feel very comfortable when receiving further support.’

‘Kath was like a rock to me. She helped me find the right position and cushion ‘set up’ for my babies. She would answer my calls/texts as quickly as she could. She would try and visit whenever I needed her help. I felt so lucky to have her support.’

Kath Kennedy has a real passion for supporting mums with breastfeeding, and goes above and beyond her contracted time to help families, often spending a lot of time with a family, over a number of visits. She is greatly valued for this. The second award this year shows that Health Professionals can also make a huge difference to a family in one discussion: one key moment that changes everything.

‘One evening I found it so painful I sent my husband out to buy bottles and formula as I had had enough. I texted Rachel in a last attempt to continue my breastfeeding journey and she came and did a home visit the very next day to help me. I am now 2 months into exclusively breastfeeding my son and I love it. Without my midwife I would have given up that night.’

The Breast Friend Panel felt that this nomination showed the potential positive impact of a single meeting. The NHS is under so much pressure at the moment that the panel felt that this was an important thing to celebrate: even one conversation can be a turning point for a family, enabling them to have the breastfeeding experience that they want to have.

South Cumbria Breastfeeding support would like to congratulate Kath Kennedy and Rachel Pearce on being given this year’s Breast Friend Award. SCBS also acknowledges the hard work and dedication of so many local NHS staff who support families with breastfeeding. Each year’s ‘winners’ of the Breast Friend Award are representatives of a wider community of Health Professionals, and SCBS thanks every one of them for everything that they do.