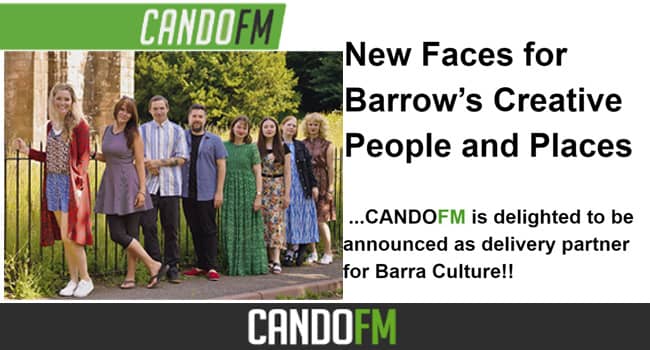 Barra Culture now have a full cohort of local staff who are putting together an exciting activity plan for the next four years.
The current plans, funded by Arts Council England, will run from now until 2025 and hope to extend far beyond this date to embed wide-ranging, cross-sector and intergenerational creative partnerships and projects across the Borough for many years to come.
So far, the first round of Boosting Barrow’s Creativity – a twice-yearly programme where local people can get support for their creative ideas – is already underway with 30 different projects from bellringing and painting to samba drumming and DJing workshops.
4 Artists-in-Residents have already been commissioned by community groups to run land art, digital and visual arts projects with local partners, with another 6 starting later in the year. 10 such projects are planned each year.
On top of all of this, Barra Culture will produce large-scale arts and cultural events each year, steered by local people, celebrating and showcasing the vast amount of creativity and themes important to residents in the area, such as the Festival of Colours, which will now take place in and around The Forum on 2 April 2022.
In order to achieve all of this, Barra Culture Director Daniel Tyler-McTighe has been joined by a creative and ambitious set of individuals to help him steer the programme in Barrow.

There are three Creative Community Connectors in the team: Kieran McDonnell – founder of Barrer Cvlt – has a huge amount of experience in working with local young people. He’s recently led Barra Culture’s creative involvement with World Skateboard Day, celebrating the creativity of the sport with an art competition for young people; Marisa Crane joins the team as a mixed-media artist and co-producer of the online zine ‘Folded’, which celebrates young Cumbrian creatives, “I think creativity is important because it establishes a sense of individuality, confidence and importance to a place and its people”; and Molly Field, a recent theatre graduate and qualified teacher from Walney who, inspired by her own experiences, has a particular interest in promoting and creating art with Barrow’s disabled residents.

Cumbrian artist and project manager Jenna Coulthard brings years of relevant experience to the team, all of whom are supported by Becky Hearfield, the programme’s Administrator, who says, “As we come out of lockdown and restrictions ease, I hope Barra Culture can offer some relief to the isolation and loneliness people have been feeling by offering creative activities for the people of Barrow.”

Barra Culture is also pleased to be working with Marketing Manager Helen Bartosinski, who grew up in the Furness area and is helping the team spread the word, as well as putting Barra Culture on the map and helping to promote Barrow as a place of regional and national significance, positioning is as a great place to live, work, play and study.

As part of the Government’s Kickstarter scheme, which helps provide opportunities for young people aged 16-24 on universal credit, central Barrovian Abbi Knight is working as an Assistant to the team. She said, “I have always enjoyed the pretty things in life and working with Barra Culture is an incredible opportunity because I’m now able to get stuck into the pretty things of Barrow!”

As well as the core team, Barra Culture are thrilled to have been working with amazing local artists since the programme began. In particular, their two in-house artists for 2021-22 are Dalton-based Danielle Chappell Aspinwall who has a socially-engaged practice which explores being neurodivergent as something that positively influences her art practice. She will be working on creative projects with local families over the coming months and Tori Davis, another local artist, Art Director and Concept Artist who specialises in traditional and stop-motion animation, most recently working on the LEGO Movie 2. She will launch her project, which looks at places, people (and their pets!) in Barrow, in the Autumn. Local project manager Amy Stretch-Parker is also helping to engage with local people and she’s no stranger to the world of creativity, having lived in Barrow all her life, and taken part in many a musical and dance show playing the piano, and worked with young and vulnerable people in the area for many years.

The new team are eager to keep making connections with the many successful organisations and companies in the town. Barra Culture is grateful for the support of everyone they have worked with so far and are happy to continue to be working with CanDoFM as delivery partners of the programme from 2021-2022.