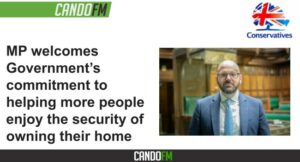 Simon Fell MP has welcomed the Prime Minister’s speech today setting out his clear vision to tackle the cost of living, including his commitment to get more people onto the property ladder – decreasing the huge amount of money spent on renting and affording more people the security of their own home.

Strong progress on housing supply has been made in recent years: over 2 million additional homes have been delivered since April 2010. From April 2019 to March 2020 over 242,000 homes were delivered – the highest level for over 30 years.

The Conservative Government will work with communities across England to build the right homes in the right places, using publicly owned brownfield land, and supporting small self-build and custom build sites, including through reusing agricultural buildings.

First time buyers and key workers will be given priority access to these news homes, with the first comprehensive review in a decade also set to examine reforms to the mortgage market.

The review will consider how industry and government can better support prospective first-time buyers to save for the deposit they need and access low-cost, low-deposit mortgages – it will deliver recommendations in autumn 2022.

The Government will build on the strong legacy of Right to Buy, which has already helped nearly 2 million households realise their dream of owning their home, by extending Right to Buy to housing association tenants.

New incentives will also turn benefits into bricks by removing home ownership and deposit saving disincentives from the welfare system – removing barriers and giving those on welfare a new choice: to use their benefit towards their first new mortgage instead of simply on rent.

“Home ownership provides people with security in the most challenging of times, but declining home ownership rates means we must do more to help people onto the property ladder.

“That is why I welcome the Government’s commitment today to reversing declining ownership rates and unlocking the opportunity of home ownership, putting more people in the position to buy and ensuring people are incentivised to save for a deposit no matter their financial situation – including housing association tenants.

“These measures sit alongside reforms to help people cut costs in every area of household expenditure, from food to energy to childcare to transport and housing, as the Government tackles the cost of living in every possible area”.

“We have a ludicrous situation whereby plenty of younger people could afford to make monthly mortgage payments – they’re earning enough to cover astronomical rent bills – but the ever-spiralling price of a house or flat has so inflated deposit requirements that saving even just 10 per cent is a wholly unrealistic proposition for them.

“First-time buyers are trying to hit a continually moving target.

“And of course the global rise in the cost of living is only making life harder for savers.

“So we want it to be easier to get a mortgage.

“Reporting back this Autumn [the review] will look at how we can give our nation of aspiring homeowners better access to low-deposit mortgages”.