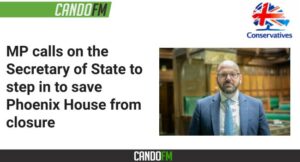 Simon Fell, the Member of Parliament for Barrow and Furness, is leading the campaign to retain what he calls a ‘vital and very specialist’ team of more than forty civil servants who work with a niche range of industrial injuries and disablement benefits.

Mr Fell has today written to the Secretary of State for the Department for Work and Pensions, after it was announced recently by the DWP that they would be closing the Phoenix House office in September 2023. The decision was taken as part of a wider review of the department’s estate.

In his letter, Simon urges the Secretary of State to overturn the DWP’s plans to close Phoenix House in Barrow, and to explore alternative sites in Barrow which the MP has offered to work together with the department to secure, to ensure that the team keep their jobs, and the service remains in Barrow.

In his letter, Simon says:

“Industrial Injuries Disablement benefit (IIDB) is a niche benefit and Phoenix House alone deals with claims for asbestos related diseases as well as any associated benefits.

“The team here in Barrow have a wealth of knowledge in relation to asbestos and related diseases, as well as fully understanding the needs and difficulties faced by mesothelioma sufferers and their families.”

Addressing the departments view that demand for this service is likely to reduce significantly, the MP says:

“There have also been suggestions by ministers that there is an expectation to see a drop in demand for IIDB in the next few years. However, the Royal College of Physicians suggest that the number of cases for certain conditions will rise in the coming years. They expect that instances of the asbestos induced cancer, mesothelioma, will peak between 2020 and 2025, which is a further reason to keep the service running as smoothly as possible.”

“When visiting the team last month, it was evident that there are grave concerns on the impact of both the previous threat of closure, and of this impending closure, on the individuals working there.  The colleagues there spoke to me at length about the pressure the uncertainty has had on them. But they were also rightly proud that this has not impacted the level of service given to claimants.

“The stress they have been put under is undeniable and it was clear that they are crying out for transparency from their senior managers about future plans, clearer communication, and better support whilst going through this process. I hope that this is something you can investigate and provide reassurances on. It is important that no matter the outcome, the staff there should be treated with dignity and supported fully throughout this process.

Mr Fell said that he hopes to ‘ramp up the pressure’ on the government by raising the issue in the House of Commons next week, and starting a  parliamentary petition which he hopes to present to the government in the coming months.