Man seen flagging down vehicles arrested on suspicion of fraud 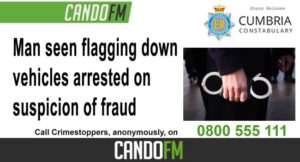 Officers have arrested a man yesteday (29 Dec) on suspicion of a fraud offence.

The man was arrested after police were called this afternoon regarding a man said to be flagging down motorists at various roadside locations in the county and attempting to acquire money “for fuel” in exchange for jewellery.

The man is 29-years-old and from the Preston area. He was located at J36 of the M6 and arrested. He remains in police custody today.

Police would like to hear from anyone who suspects they may have been approached by the man.

You can report online at www.cumbria.police.uk/reportit , quoting incident number 125 of 29th December 2021. You can also phone on 101.