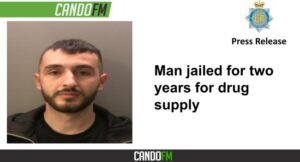 A member of a crime group has today (July 27) been sentenced to two years imprisonment at Preston Crown Court for trafficking cocaine into south Cumbria, after he was stopped on the A590 near Barrow with approximately £20,000 worth of the drug hidden in his car.

On 6th April 2022 Xhoni Doka,26, of Station Road, Westcliff-on-Sea, Essex was stopped by police officers in a silver Mercedes, having travelled that morning from London.

The Mercedes was searched, and half a kilogram of high-purity cocaine was found hidden in a perfume bottle, along with 56 deal-ready half-gram bags of the drug. A linked address in Barrow was also searched recovering electronic scales, a large quantity of unused snap bags, and around £3000 in cash.

Doka initially denied knowledge of the cocaine, saying a friend had borrowed the toiletries and returned them to him that day. He also claimed that the empty snap bags found at the linked Barrow address he intended to sell in Cumbria for a profit, and that the electronic scales in his bedroom were for weighing chilli peppers for cooking.

A spokesperson for south Cumbria’s Community Serious and Organised Crime Unit said: “We welcome Xhoni Doka’s sentence today, and hope it sends a strong message that organised drug trafficking will not be tolerated in Cumbria.

“Cocaine is a product that comes with substantial violence and exploitation throughout the supply chain.

“We continue to target organised criminality in south Cumbria and will pursue those involved – whether you are a ‘boss’, a courier, or a street dealer – at every level.”

The information we receive from you on drugs supply is crucial to our efforts to tackling this issue. If you witness drug supply activity or have information, please report this to us.

You can do this quickly and easily online at www.cumbria.police.uk/report-it.

Alternatively, you can contact independent charity Crimestoppers, anonymously, on 0800 555 111.