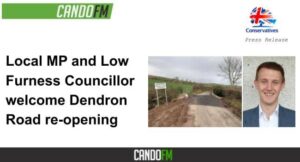 Greystokes Lane, which connects the villages of Leece and Dendron, was closed to all traffic from November 2020, as roadworks were carried out to repair an ageing culvert which ran under the carriageway. In March this year, the culvert collapsed prompting emergency work from the Highways team to remove the blockage ahead of forecast heavy rainfall. During these emergency works, a water main was exposed, requiring investigations from United Utilities before any further repairs could take place. A new culvert was subsequently designed and installed to avoid interfering with the live water main. Following the completion of the work, the road was re-opened early in the New Year.

Commenting, Councillor Ben Cooper said “It’s great news that the Dendron Road is now re-opened, after being closed for over a year. This is an important connection between our villages in Low Furness and it forms part of the National Cycle Route 700. Local residents contacted me feeling frustrated at what they saw as the slow progress with these repairs, but together, we lobbied the Council to get on with the job, and now we’ve got it done”.

“This proves the benefit of elected members such as Ben and I, getting out into all corners of our patch, and listening to local people about the issues that affect them.

“Many local people raised this road closure with me, and it’s caused great disruption and frustration. Working together with Cllr Cooper we’ve been able to move things along and get the road into Dendron re-opened, so that local drivers won’t be disrupted by this anymore”.