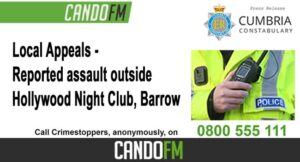 Police are investigating a reported assault outside Hollywood Night Club, Barrow, which occurred on 28th December between 1:30am and 1:45am

A local man in his 20s sustained chipped teeth and cuts and bruises following the incident.

The second man was described as in his 20s and wearing a grey jumper.

Police are appealing for any witnesses to the incident.

Anyone with information relating to this incident can report online at www.cumbria.police.uk/reportit , quoting incident number 12 of 28th December. You can also phone on 101 to speak to PC 2581 Stanway.