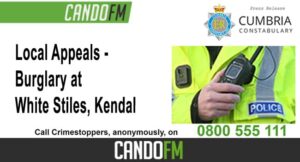 Police are investigating a burglary at a property on White Stiles, Kendal, that occurred on 15th December at approximately 2pm.

The suspect made off after being disturbed by the occupant. A sum of money is believed to have been taken during the incident.

Police are appealing for witnesses who may have seen a man acting suspiciously within the area. The man is described as in his 50s, white, 5ft 8ins of medium build with a round face and was wearing green clothing.

Anyone with information relating to this incident can report online at www.cumbria.police.uk/report-it, quoting incident number 128 of 16 December 2021. You can also phone on 101. Alternatively you can contact Crimestoppers, anonymously, on 0800 555 111.