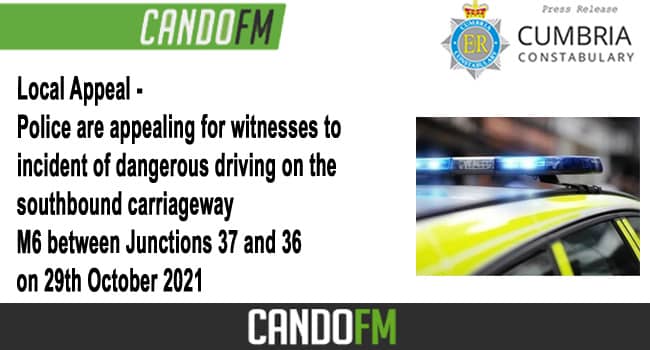 Police are appealing for witnesses to an incident of dangerous driving which took place on the southbound carriageway of the M6 on 29th October 2021 at around 6.45pm between Junctions 37 (Sedbergh) and 36 (Kendal/Barrow).

The incident involved a blue BMW 3 series saloon, a silver BMW X5 and resulted in a lane three collision on the approach to Junction 36. Five people attended hospital as a result of injuries sustained during the collision and a 38-year-old man was arrested at the scene and subsequently released under investigation.

Anyone who witnessed the manner of driving of either vehicle, or who may possess dashcam footage of same, is asked to contact Cumbria Police on 101 quoting Log 210 of 29th October.

Contact can also be made on 101emails@cumbria.police.uk or the Report It page on cumbria.police.uk. Alternatively,  reports can be made anonymously with Crimestoppers on 0800 555111.