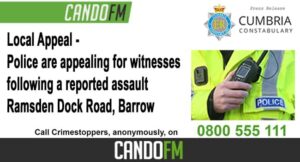 Police are appealing for witnesses following a reported assault. The incident occurred on the 25th of November, 2021 at approximately midnight, on Ramsden Dock Road, Barrow.

A man in his 50’s from Scotland, was arrested on suspicion of ABH assault. He has since been released under investigation.

A man in his 50’s from County Durham, received injuries including cuts and bruises. He did not attend hospital.

Anyone with information is asked to contact police via www.cumbria.police.uk/report it.

You can also contact PC 2940 on 101. The reference number to quote is incident number 2 of the 25th November.

Alternatively, you can call the independent charity Crimestoppers, completely anonymously, on 0800 555 111