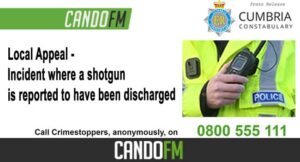 Following new lines of enquiry police are appealing for information in relation to an incident where a shotgun is reported to have been discharged.

Police were contacted on 31st December to the report of an incident where a shotgun is believed to have been discharged on farming land when a members of the public was in close proximity. The incident occurred on the afternoon of the 31st December 2021 in the area of Crook Wheel in Flookburgh.

There was no perceived threat to the wider public.

A 60-year-old man from the local area was arrested on suspicion of possession of a firearm with intent to cause provocation of violence. He has since been released under investigation.

Police are appealing for witnesses who may have been in the area. Police are especially keen to speak to a family with children that were reported as being near where the incident took place. Anyone who witnessed this incident, or anyone that was in the area between 1pm and 3.30pm is asked to contact police.

Anyone with information relating to this incident can report online at www.cumbria.police.uk/reportit , quoting incident number 144 of the 31st December 2021. You can also phone on 101.