Knife surrender being held in Cumbria 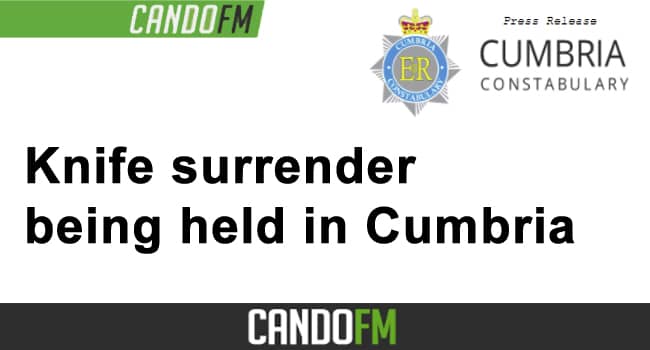 People in Cumbria are being given the chance to hand in unwanted knives during a week-long surrender.

Operation Sceptre is being run as part of a national drive to tackle knife crime and stop potentially dangerous blades falling into the wrong hands.

The surrender will apply countywide and runs between Monday 26th April and Sunday 2nd May.

During this time the public will be able to anonymously hand in unwanted knives, including knives that are prohibited, to surrender bins at police station front counters.

Cumbria continues to see a lower number of knife offences than other areas of the country. But officers are not complacent about the risk – and they want as many knives as possible to be handed over during the week.

Officers will also be out engaging with retailers to educate them around knife crime and the selling of knives.

He said: “Fortunately, in Cumbria we do not have a specific knife crime culture and we continue to see a lower number of knife related incidents than in other areas of the UK.

“Operation Sceptre give the public the opportunity to hand in any unwanted and potentially dangerous blades from our county.

“We will not be complacent on this issue although our number are low knife crime is a serious offence and every knife that is handed in to us is one less knife that can be used to hurt somebody – or worse take their life.

“I would encourage anyone who has a knife that they want to safely dispose of to take this opportunity to do so.”

Knife surrender bins will be available at the following police stations:

Anyone wishing to bring knives or weapons for destruction should consider how they are transported to police stations. Please bring them wrapped up or boxed so that they remain safe while being carried. If in doubt, please contact 101 for further advice.