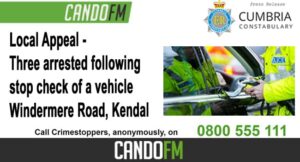 A third man aged 28 from Liverpool was also arrested on suspicion of burglary and released under investigation.
The burglary offences are in connection with a report of burglary on 12th October in the area of Finsthwaite, in which  a quad bike was taken.