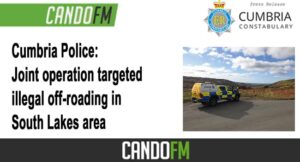 At the weekend, police teamed up with partner agencies in an operation aimed at targeting illegal off-roading in the South Lakes area.

The during the day numerous off-roaders were spoken to and advised of the legal routes within the area (available at Hierarchy of Trails Routes | Cumbria County Council  ).

The operation was successful in disrupting illegal activity in the Great Burney area which has suffered a great deal of damage by these activities.

Ignorance of the law and legal routes has shown to be the main cause in past successful prosecutions.

Unless they are on private land with the owner’s permission, riders and drivers must be insured, have a valid MOT and hold a valid driving license.

Vehicles leaving the legal routes are committing offences under the Road Traffic Act and can be seized under S59 of the Police Reform Act and depending on the particular area face further offences for damaging SSSIs (Sites of Special Scientific Interest).

Councillor Ian Wharton of Cumbria County Council said: “The operation was run by the Police, various agencies, such as the National Park etc and residents.

“This was a great example of local agencies and residents working together to protect the Park and encourage responsible behaviours.

“We do not want to deter people coming here, but encourage them to fully appreciate it and respect not only the environment but also the locals.”

Inspector for South Lakes Grant Kelso said: “We’d like to thank the partner agencies who supported the operation and helped educate people on the law and the potential for damage to the National Park.

“This operation is not a one-off and targeting illegal off-roading will continue to be a priority for police and our partners here in South Lakes.”