It’s Not Ok – The signs of an unhealthy relationship 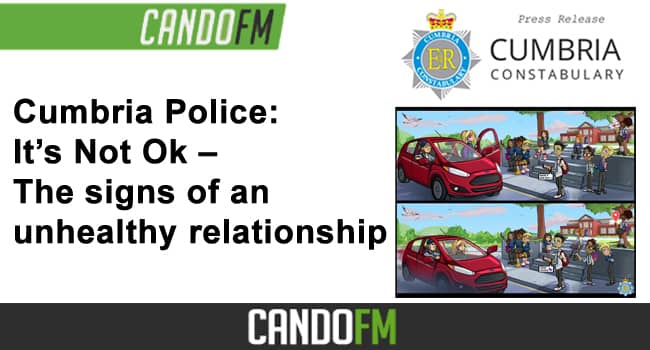 Cumbria Police, working with the NSPCC and Cumbria Safeguarding Children Partnership (CSCP), have launched artwork set to make people ‘look’ for the signs of an unhealthy relationship.
The artwork, which is youth focused, has been launched to support the It’s Not OK campaign, and the Constabulary’s Child Centred Policing team’s May, social media campaign.
The force’s CCPT have been working with a talented local artist to create the artwork, with support from local young people and the ‘It’s Not Ok campaign partners.
They scene is based on the NSPCC’s guide to a healthy relationship, which can be found on their website: Healthy relationships | NSPCC.
The artwork invites the viewer to ‘look’ at a picture depicting positive relationships, then to ‘look’ again and see the negative effects unhealthy relationships can have on a young person.
The signs of an unhealthy relationship include:
• Becoming isolated and spending little time with family or friends.
• Controlling behaviour, such as being told what to wear, always needing to let the person know where they are or what they’re doing or having their social media accounts monitored.
• Feeling pressured or like they have to do things they’re uncomfortable with. This could include being pressured into sex or to send nudes or sexual images.
• Having their money, access to food or day-to-day items controlled.
• Being prevented from working or going to school or college or feeling reluctant to go to school.
• Persistent changes to a child’s mood or behaviour can also be a sign that something’s wrong.
• Being bullied or experiencing sexual bullying, either online, in private or in front of others at home or in school.
Child Centred Policing Inspector, Gemma Hannah, said:
“sometimes it’s hard to identify behavioural change in young people, there is a lot going on in our daily lives already and these changes can easily be misinterpreted as growing up or being stressed or tired etc.
“We created this artwork to help raise awareness of the signs of an unhealthy relationship, in a new way, that is accessible to everyone.
“By asking people to engage and really ‘look’ at the artwork, to see what has changed, we hope the different scenes will stick in people’s minds to consider in real life situations.
“We also hope the two scenes will start conversations about healthy relationships, which are vital to aid confidence and understanding in young people.”

About the Child Centred Policing team:
The CCP teams were implemented in the Cumbria Constabulary following extensive research into childhood offending and early intervention.
A child centred approach to policing aims to ensure that children (persons under 18) are not unnecessarily criminalised and that every opportunity is taken to divert them away from offending.
CCP officers have been trained in specialist areas including, Adverse Childhood Experiences and Trauma Informed Care.
The Teams work closely with partner agencies, support services and charities who work with children and their families to provide help, engagement, and support.

About the It’s Not Ok Campaign:
The It’s not Ok campaign is tackling child exploitation in Cumbria. It is currently focusing on healthy relationships.
The CSCP, together with the NSPCC, launched the It’s Not OK campaign in October 2020.
The 12-month campaign has previously covered criminal exploitation and online safety.
The third and current phase is highlighting the differences between a healthy relationship and an unhealthy relationship; differences in behaviour that an unhealthy relationship can cause; the affect it can have on a child’s mental health; and what can be done to help protect the children of Cumbria.
For more information on the It’s Not Ok Campaign visit IT’S NOT OK : Cumbria County Council (cumbriasafeguardingchildren.co.uk).
About the Child Centred Policing team’s, May Campaign: Did You Know?
The CCPT have launched a social media campaign today titled: Did you Know? The campaign is targeted towards parents and carers and aims to provide them with information guidance and support service information for young people.
The campaign will target areas including:
• Violent crime
• Indecent image sharing
• Consent
• Personal safety
• Dispelling common crime myths
• Drugs
• Personal safety
• Crime reporting
For more information on the Child Centred Policing Team and the Did You Know? Campaign visit www.cumbria.police.uk/youth.
To report a crime contact: Cumbria.police.uk/reportit | Tel 101 | Tel 999 (emergency number).
If you are a young person and would like to support without police involvement please contact: Childline | Childline | Tel 0800 1111.
If you are worried about a young person and would like to support without police involvement please contact: NSPCC | The UK children’s charity | NSPCC | Tel 0808 800 5000.